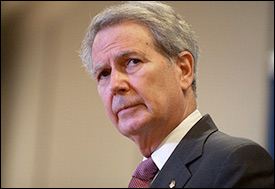 END_OF_DOCUMENT_TOKEN_TO_BE_REPLACED

The first in a series of consecutive May primary weeks went solidly for the incumbents last night, as all US House members facing intra-party challengers, including House Speaker John Boehner (R-OH-8), rode to victory.

In the preponderance of cases, the incumbents won in the normal landslide proportion one would expect in primary elections. In only three instances, those of representatives Renee Ellmers (R-NC-2), Walter Jones Jr. (R-NC-3) and David Joyce (R-OH-14), did the incumbents fail to break 60 percent. Speaker Boehner, after campaigning hard and hitting the television airwaves to rebuff his under-financed but creative opponents, scored 69 percent of the vote.

The best news of the evening for Republicans came in North Carolina, where state House Speaker Thom Tillis exceeded the 40 percent threshold to win the party’s US Senate nomination outright. Late polling clearly suggested that Tillis would place first in the field of eight candidates, but questions remained as to whether he would END_OF_DOCUMENT_TOKEN_TO_BE_REPLACED

Today is primary day in North Carolina, and Raleigh-based Public Policy Polling just released their last poll for the Republican nomination race. Previously, PPP projected state House Speaker Thom Tillis to be exceeding the 40 percent threshold required to claim the nomination without a run-off (46 percent), but they now detect a weakening position.

According to their latest data (May 3-4; 925 NC Republican primary voters), Tillis would garner exactly 40 percent of the Republican primary vote, compared to physician Greg Brannon’s 28 percent, and Charlotte pastor Mark Harris’ 15 percent. In a potential run-off between Tillis and Brannon, the speaker’s lead is only six points, as the candidates register a 46-40 percent split.

It’s not surprising to see Tillis taking a hit. All of the candidates, including incumbent Sen. Kay Hagan (D), are launching attacks and attempting to deny Tillis the nomination for their own political reasons.

All late polling slots Tillis in first place and Brannon in second. The question to be answered when votes are counted tonight, is whether the North Carolina state legislative END_OF_DOCUMENT_TOKEN_TO_BE_REPLACED