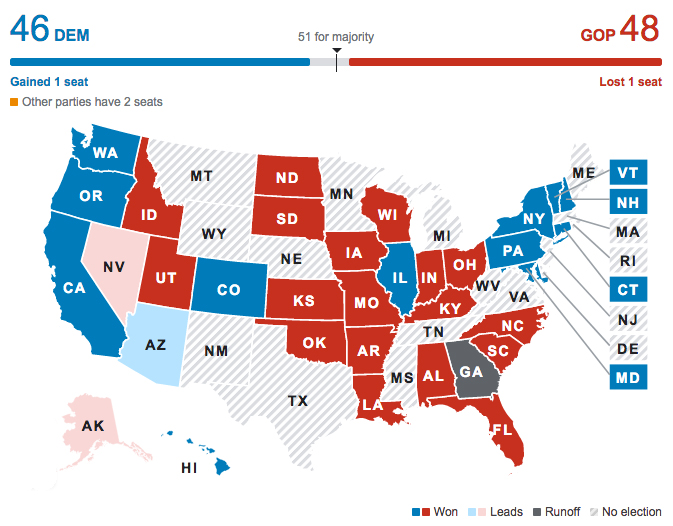 Click the map above to go to interactive version by AP.

Senate: Coming Down to Nevada & Georgia — With Sen. Mark Kelly (D) holding a lead of greater than 115,000 votes, he will soon be projected the Arizona race winner. This means the Senate majority will be determined in the tight Nevada contest and what appears to be a runoff contest in Georgia that will be scheduled for December 6th.

In the Peach State race between Sen. Raphael Warnock (D) and Republican Herschel Walker CNN projects that 99 percent of the votes tabulated, and Sen. Warnock’s edge over Walker is 49.6 to 48.3 percent, a margin of just under 49,000 votes. It is now highly unlikely that enough votes remain to push Sen. Warnock over the 50 percent mark. Therefore, the secondary election will be required. If the Laxalt lead holds, the Georgia race will determine the next Senate majority.

House: Majority Count Remains in Limbo — Several more congressional race projection calls were issued yesterday, and Republicans now have 211 declared seats as compared to the Democrats’ 198 according to the CNN race results count. Of the 26 uncalled, 11 are clearly headed to one party or the other. The 15 uncalled campaigns that are purely undecided will put the final touches on the House majority.

At this point, it appears the Republicans will claim a very small chamber edge, likely ending between 219 and 222. Several races flipping back to the Democrats, particularly those from California with large numbers of outstanding votes, could still result in the Dems hanging onto their majority by a single vote, 218-217.

At this point, Democrats are leading in the three-way Oregon race, while Republican Joe Lombardo has a discernible lead over incumbent Democrat Gov. Steve Sisolak in the Nevada race. At least 12 percent of the ballots remain to be counted in the Silver State, but Sheriff Lombardo looks to be in good position to win the election. If he does, this could be the only Republican conversion election in the country.

Arizona Secretary of State Katie Hobbs is leading the governor’s race in her state. Her margin over former news anchorwoman Kari Lake is small, but consistent. Should Hobbs hold, she too would be in position to convert a Republican governorship to the Democrats, joining what happened in Maryland and Massachusetts. Voting machine problems have delayed the Arizona election returns, so it may be awhile before we know the final outcome.

Otherwise, incumbents had a very good night in the governors’ races despite the high level of competition seen throughout the country.