April 25, 2022 — The Federal Election Commission (FEC) has released the campaign finance reports for the quarterly period ending March 31, and the Daily Kos Elections site analysts have published their regular comprehensive summaries for all Senate and House incumbents and candidates. 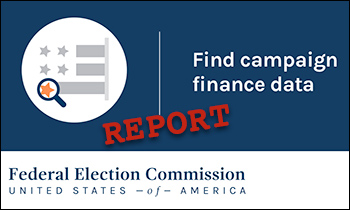 In the Senate, the top fundraisers for the campaign-to-date are familiar names, and they are repeating their overwhelming performance from the 2020 election cycle. For the 2022 race, Georgia Sen. Raphael Warnock (D) reports $44.2 million in receipts with a cash-on-hand total of $25.6 million. Both are higher than any individual running for the Senate in the 2022 cycle. Sen. Mark Kelly (D-AZ) is close behind, raising $39.0 million for the campaign cycle with $23.3 million in his treasury.

The next most prolific fundraisers come from the same race. Florida Congresswoman Val Demings (D-Orlando) is the top money producing challenger in the country, posting $30.5 million in receipts for the campaign cycle. Her opponent, Sen. Marco Rubio (R), is virtually even with her, attracting $29.3 million. Cash-on-hand is about dead even, too. Rep. Demings reports $13.2 million in her account; Sen. Rubio, $13.1 million.

For the Republicans, the top challenger fundraiser, though he is leagues behind general election opponent Sen. Warnock, is Georgia’s Herschel Walker with $14.2 million raised.

The aggregate group of Senate candidates raising the most in one challenger contest is found in Wisconsin, as Democrats Alex Lasry, state Treasurer Sarah Godlewski, and Lt. Gov. Mandela Barnes have cumulatively brought in $18.2 million. Lasry, an executive with the Milwaukee Bucks professional basketball club, has gross receipts of over $9 million, but $5.8 million is self-sourced. Godlewski reports $5.1 million in total dollars raised, but $3.3 million comes from herself. Lt. Gov. Barnes has raised $4 million without any self-funding. For his part, Sen. Ron Johnson (R) has obtained $10.8 million for his 2022 re-election campaign.

The most prolific open seat fundraisers are in Pennsylvania and Ohio. The combined candidate dollar total in the Keystone State exceeds $45 million, but almost $18 million of that total is self-funded from Dr. Mehmet Oz (R) and former hedge fund CEO David McCormick (R). The group from Ohio is close behind with $44.8 million obtained. In this case, we see a combined self-funding total that exceeds $21 million.

On the House side, a total of 32 incumbents and challengers raised over $1 million just during the first quarter. Naturally, the party leaders, Minority Leader Kevin McCarthy ($4.3 million), Minority Whip Steve Scalise ($3.4 million) and Speaker Nancy Pelosi ($3.3 million) are the most prolific.

Majority Leader Steny Hoyer ($510,000) and Majority Whip Jim Clyburn ($284,000) are clearly not in the top echelon, but are likely spending their time raising funds for their leadership PACs or the Democratic Congressional Campaign Committee (DCCC). Additionally, with Democratic incumbents and candidates raising considerably more than their Republican counterparts, the individual campaigns need less from Washington.

The top non-incumbents breaking the $1 million mark for the quarter are Jessica Cisneros, now in a Texas Democratic runoff with Rep. Henry Cuellar (D-Laredo) and Marcus Flowers, who is challenging Georgia Rep. Marjorie Taylor Greene (R-Rome), both at $2.4 million.

In Flowers’ case, he has already raised just over $7 million for the campaign, but has only $1.9 million remaining in his campaign account. In contrast, Rep. Greene reports a cash-on-hand figure of $3.04 million, and raised just over $1 million for the quarter. Since the new GA-14 district is rated R+45 according to the FiveThirtyEight data organization, the primary is of greater concern for the congresswoman. Her top opponent, healthcare company owner Jennifer Strahan, shows only $158,000 cash-on-hand through March 31.

The other non-incumbents to break the $1 million barrier for the first quarter are Californians Kevin Kiley (R) in open District 3, and Asif Mahmoud (D) who is challenging Rep. Young Kim (R-La Habra) in new District 40.

Among the paired incumbents, West Virginia Reps. David McKinley (R-Wheeling) and Alex Mooney (R-Charles Town) are squaring off in the May 10 primary, and the latter man has a clear monetary advantage. Rep. Mooney has raised $3.5 million for the campaign with $1.4 remaining in his campaign treasury, while Rep. McKinley has obtained $1.47 million and holds $1.03 million in the bank.

Next up is the Georgia Democratic pairing on May 24. There, Reps. Lucy McBath (D-Marietta) and Carolyn Bourdeaux (D-Suwanee) are battling for the new D+16 District 7. Both enjoy strong funding with Rep. McBath raising $3.95 million with $2.9 million in the bank, while Rep. Bourdeaux reports $3.03 million in receipts with a cash-on-hand figure of $2.1 million.

The two Illinois pairings, scheduled for their respective primaries on June 28, have clear fundraising leaders. For the Democrats in new District 6, Rep. Sean Casten (D-Downers Grove) posts receipts of $2.01 million and a cash figure of $2.7 million. His opponent, freshman Rep. Marie Newman (D-La Grange), has seen her previously more robust fundraising program slip somewhat. Her total 2022 campaign receipts figure is $1.2 million with only $553,000 remaining in the bank.

Turning downstate, Rep. Rodney Davis (R-Taylorville) has brought in $2.74 million for the campaign with $1.93 million remaining to spend. His Republican opponent, freshman Mary Miller (R-Oakland) has considerably less. Her total campaign income is $1.1 million with $511,000 in her treasury.

One of the primary campaigns attracting the most national political attention is the Republican battle between Rep. Cheney and Hageman, who has former President Donald Trump’s endorsement.

Rep. Cheney again had a stellar fundraising quarter with $2.9 million raised, thus bringing her total 2022 campaign income to $10.2 million. Hageman also had a good quarter, raising $1.3 million for a total of $2.04 million for the cycle. Her cash-on-hand figure is $1.06 million. The Wyoming primary is Aug. 16.

Perhaps a surprise primary involves Minnesota Rep. Ilhan Omar (D-Minneapolis). While she has raised $2.02 million for the campaign, her first quarter 2022 total only reached $272,000, and her cash-on-hand total has dropped to $493,000. Her main Democratic opponent, former Minneapolis City Councilman Don Samuels, who only relatively recently entered the race, brought in $351,000, but has $318,000 in remaining cash. Developments here could be worth watching.