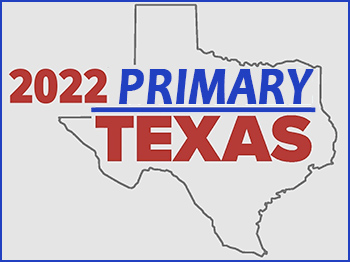 Gov. Abbott easily captured the nomination to run for a third term, defeating former Texas Republican Party chairman Allen West and ex-state Sen. Don Huffines with 67 percent of the vote. O’Rourke topped a group of Democratic candidates to easily secure his nomination, attracting a whopping 91 percent. Several thousand votes remain to be counted. Gov. Abbott will be favored in the general election.

Bush’s open Land Commissioner position will also go to a secondary election with state Sen. Dawn Buckingham (R-Lakeway) garnering 41.9 percent. Her runoff opponent will be pastor Tim Westley who appears to have clinched second place with 14.8 percent of the vote. The Texas runoff election is scheduled for May 24.

A pair of incumbents are forced into runoff elections while all other incumbents won their elections outright. The open seat contests also unfolded as expected.

Reps. Henry Cuellar (D-Laredo) will again face opponent Jessica Cisneros in a secondary May 24 election. After trailing all night, Cuellar finished first with 48.5 percent as compared to Cisneros’ 46.8 percent, a difference of 807 votes. Third place finisher Tannya Benavides’ small 4.7 percent share is enough to force the runoff as neither top finisher reached 50 percent.

In north Texas, Rep. Van Taylor (R-Plano) will also be forced to a runoff. He came within 1.3 percentage points of winning outright. Former Collin County Judge (Executive) Keith Self advances but recorded only 26.5 percent of the vote. He outlasted financial executive Suzanne Harp by just over 3,600 votes.

The Harris County counting is very slow, and substantial votes remain to be counted. Therefore, the Luttrell and Hunt outright victories are not yet official but it appears both will have high enough percentages to remain above the 50 percent nomination threshold.

It likewise appears that state Rep. Jasmine Crockett (D-Dallas), the leading candidate to replace retiring Rep. Eddie Bernice Johnson (D-Dallas), is falling just short of the 50 percent mark and will advance to a runoff against the Biden campaign’s Texas director, Jane Hamilton. Rep. Crockett, at 48.1 percent of the vote, is knocking on the door of outright victory and will be favored in the runoff.