April 12, 2022 — Candidate filing closed in Arizona, New Jersey, and New York for major party candidates, and for all candidates in Tennessee. The first three states noted each have later deadlines for minor party, independents, and write-in candidates. 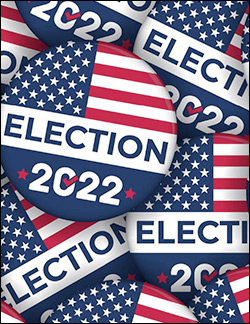 In Arizona, the Senate and governor races highlight the state’s political battles this year, and there were no surprise entries in either contest.

The Senate race features incumbent Sen. Mark Kelly (D), who is running for a full six-year term after winning the 2020 special election to fill the balance of the late Sen. John McCain’s (R) final term. He has no primary opposition. Republicans feature five candidates, but the battle is revolving around three of them for the party nomination — Attorney General Tim Brnovich, venture capitalist Blake Masters, and former solar energy company CEO Jim Lamon.

Four key congressional general election races and a Republican primary are on tap in Arizona. Rep. David Schweikert (R-Fountain Hills) inherits a tougher new district, now numbered 1, that rates a R+7 according to the FiveThirtyEight data organization. His current 6th District is R+13. Physician Hiral Tipirneni (D), who held Rep. Schweikert to a 52-48 percent victory in 2020, is not returning for a re-match. Former Phoenix Suns executive Adam Metzendorf appears to be the strongest of the three filed Democrats. Rep. Schweikert drew two minor GOP primary opponents.

Rep. Tom O’Halleran (D-Sedona) has an R+6 rated 1st District under the current map, but the new 2nd District, despite having almost two-thirds of his current territory, increases to R+15, making him possibly the most endangered Democratic incumbent in the country. Six Republicans are vying for the party nomination, the leader of whom appears to be state representative and decorated Army veteran Walt Blackman.

Democratic representative and former Phoenix mayor, Greg Stanton (D-Phoenix), is also looking at a post-redistricting competitive general election. Seeing his Phoenix metro district move from D+15 to D+1 suggests that a Republican challenger will be a serious contender in November. Six Republicans are vying for the party nomination including two sports figures. Jerone Davison is a pastor and former member of the then-Oakland Raiders NFL franchise after playing football for Arizona State University. Tanya Wheeless is an attorney and former senior vice president for the Phoenix Suns NBA franchise.

The open Tucson-anchored 6th District is another commission-drawn CD designed to be competitive for the decade. Rep. Ann Kirkpatrick (D-Tucson) had she decided to seek re-election, would have run here. This is a must-win seat for Republicans if they are to capture a House majority. House GOP Leader Kevin McCarthy (R-CA) has already endorsed former Hispanic Chamber of Commerce official Juan Ciscomani among a field of five GOP candidates. Democrats feature a battle between state Rep. Daniel Hernandez (D-Sunnyside) and former state senator Kirsten Engel.

Rep. Debbie Lesko (R-Peoria) draws no opposition in her 8th District. In the new 9th CD, controversial Rep. Paul Gosar (R-Prescott) sees his home placed outside the new 9th, but faces only a Republican primary battle in a CD that contains 70 percent of his current constituency.

END_OF_DOCUMENT_TOKEN_TO_BE_REPLACED

Jan. 10, 2022 — Now that the new redistricting maps have been finalized in as many as 27 states, analysts can produce more detailed data about how the new seats will perform politically.

Such is the case in Arizona, as the Phoenix-based Data Orbital firm has published a new report about the Grand Canyon State’s congressional and state legislative maps. The DO research paints a more detailed picture of what we might expect in the 2022 elections.

At first glance, it appeared that the Arizona map might be one of the nation’s most competitive. The new Data Orbital information certainly supports such a conclusion, and tells us that two incumbents actually have more difficult situations than suggested at first glance, one a possibly easier road to re-election, and a third district that will likely produce razor-thin margins for either party in at least the decade’s early elections.

It was clear that Reps. David Schweikert (R-Fountain Hills) and Tom O’Halleran (D-Sedona) were placed in more competitive situations than their current CDs yield, but the more detailed historical data finds that their respective roads to re-election are even rockier.

The Data Orbital firm measured each district through five statewide elections from 2020 and 2018, overlaid the partisan registration figures, added the new registration trends, and took into account district electorate performance in high and lower turnout situations.

Using all of this data, we see that Rep. O’Halleran clearly has the worst draw and his chances for re-election this year appear dim. His new 2nd District (previously numbered 1) went Republican in all five of the tested elections; Republicans have the edge in current and new voter registration, and the Republican candidates performed better in both high and low turnout elections.

In all, the Republican nominees averaged vote margins of more than 10 percent over their Democratic counterparts. There is no statistical measure where Democrats outperformed Republicans in the new 2nd District, which places Rep. O’Halleran in the most difficult position of all the incumbents seeking re-election.

Rep. Schweikert, who won his last re-election in the current 6th District with only 52 percent, sees a much tougher road ahead of him in 2022 within the confines of the new 1st District.

In the five tested races — 2020 presidential, 2020 Senate, 2020 congressional, 2018 gubernatorial, and 2018 attorney general — Republicans only won two. The winning percentage for the Republican victories, however, is much higher than the three Democratic victories – the Dems only scored a cumulative winning average of 1.2 percent — so Schweikert certainly has a chance of winning another term. The GOP does score an overall performance margin advantage of 4.1 percent and leads the Democrats in party registration, among new registrants, and in both low and high turnout elections.

At first glance, it appeared that Rep. Greg Stanton (D-Phoenix) would have a more difficult re-election situation than what the deeper dive numbers suggest. Democrats won four of the five tested elections, the overall vote average favors the Democratic candidates by 5.6 percentage points, and while registration breaks almost evenly among the Democrats, Republicans, and Independents, the vote performance figures suggest that the Independent sector clearly leans Democratic. While Independents overwhelming lead the new registration category, the Democrats also outperform the Republicans by 2.4 percentage points.