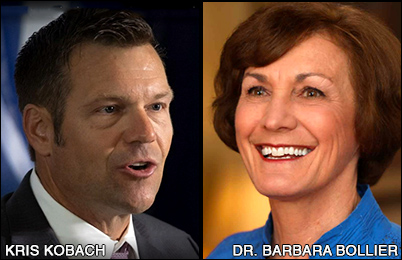 The Kansas polling sample, like in so many places, reveals a severely polarized electorate. The respondents indicate they voted for President Trump in a 55-35 percent margin over Hillary Clinton back in 2016, which appears an accurate representation of the actual Kansas vote (57-36 percent). Of the people self-describing themselves as Trump or Clinton voters, by a margin of 83-8 percent, the Trump partisans would vote for the Republican Senate candidate, while the Clinton voters break for the Democratic contender at an even larger 89-3 percent clip.

Where the Republicans have room to grow is found when the partisan screen is applied to the Senate ballot test. While the self-described Clinton voters would support Dr. Bollier in a 90:2 percent ratio, the Kobach loyalty factor among the Trump supporters is not as high. He records a 72-14 percent vote factor, which is clearly not as strong as Bollier fares among the Clinton backers.

Though Kobach still commands a strong margin, it is within this sector that his number must improve if he is to win a general election. It is also reasonable to conclude that one of the other Republicans would record a higher partisan loyalty factor, which would likely put that candidate ahead of Dr. Bollier.

This is a Senate race that must be observed closely at least through the nomination period in early August. It does appear that the Democrats are in a competitive position here if Kobach becomes the Republican standard bearer, and this would become a race to draw national attention, if so.

More data, which undoubtedly will soon be forthcoming, is needed to see if the other Republican candidates fare better against Dr. Bollier. When looking at the PPP results in their totality, it is probable that the answer will be affirmative, but the actual data will reveal the concrete answer. Expect this open seat race to begin drawing much more attention in the coming weeks.