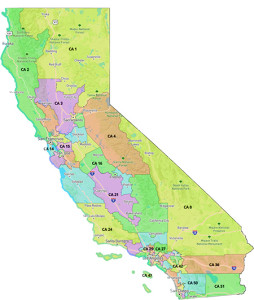 Rep. Jim Costa (D) – Incumbent, 8th Term – 37.5%
Kevin Cookingham (R) – Realtor – 35.6%
• Rep. Jim Costa (D-Fresno) was challenged from his left in the person of Fresno City Councilwoman Esmeralda Soria (D), thus the reason for his low vote total in the jungle primary. The veteran congressman’s tough election is over, however, as he becomes a strong favorite in the general. Republican Kevin Cookingham raised only $86,000 for the primary and will likely not be much of a factor in the November campaign. Likely Democratic

David Valadao (R) – Former Congressman – 50.8%
Rep. T.J. Cox (D) – Incumbent, 1st Term – 38.4%
• This may be the most serious challenge race in California. In 2018, Fresno businessman T.J. Cox unseated then-Rep. David Valadao by just 862 votes. In the return match, Valadao is obviously off to a strong start in not only holding Rep. Cox under 50 percent, but exceeding the number, himself. The district is still heavily Democratic, but this race appears to be one of the best Republican conversion opportunities in the country. Toss-up

• (Vacant Seat – Special Election, May 12th; both advance to Regular General)
Christy Smith (D) – State Assemblywoman – 31.7%
Mike Garcia (R) – Defense Contractor; Iraq War Veteran – 23.9%
• Rep. Katie Hill (D) resigned this seat late last year as a result of a sex scandal. State Assemblywoman Christy Smith and military veteran Mike Garcia will face each other in the May 12 special election, and again in November regardless of the special outcome. In third place was former Rep. Steve Knight (R), who lost to Ms. Hill in 2018. He conceded to Garcia even though the count is still progressing.
The San Fernando Valley 25th District was a reliable Republican seat, but it has moved into the Democratic realm. There is a chance for an upset here, but Smith appears to have the inside track both in the special election and November. Lean Democratic

Young Kim (R) – Ex-Assemblywoman; 2018 Finalist – 48.6%
Rep. Gil Cisneros (D) – Incumbent, 1st Term – 46.6%
• This is one of six California seats that turned in the 2018 after count and we can expect another close finish in 2020. Former Assemblywoman Young Kim may outpace freshman Rep. Gil Cisneros in this primary, which is surprising considering the Democratic presidential campaign should have given their party candidates a boost. This is another historically Republican district that is moving Democratic, but this race will clearly again be a competitive battle in the general election. Lean Democratic

Rep. Katie Porter (D) – Incumbent, 1st Term – 50.6%
Greg Raths (R) – Mission Viejo City Councilman – 18.0%
• Mission Viejo Councilman Greg Raths has officially been projected the second place finisher meaning that he advancing to the general election, overcoming five Republican opponents. Though the gap between Raths and freshman Rep. Katie Porter (D-Irvine) was wide, the combined Republican vote is, so far as counting continues, 49.4 percent.
The 45th District is a national Republican target, and we can expect a tight race in the fall. Currently, Rep. Porter must be rated as only a slight favorite. Lean Democratic

Rep. Alan Lowenthal (D) – Incumbent, 4th Term – 45.0%
John Briscoe (R) – School Board Trustee – 17.3%
• It is surprising that Rep. Lowenthal (D-Long Beach) dropped below 50 percent in the primary, and he will recover in the general election to at least win with a victory margin in the high 50s. Safe Democratic

Rep. Harley Rouda (D) – Incumbent, 1st Term – 46.7%
Michelle Steel (R) – Orange County Supervisor – 34.9%
• The Orange County 48th CD is likely the strongest Republican seat that went Democratic in 2018. Republicans hope for a rebound this year behind consensus candidate Michelle Steel (R), an Orange County supervisor, who is poised to run a strong campaign. It does appear, however, that both Rouda and Steel may have under-performed in the primary with him dropping below 50 percent and she looking to finish under 40 percent. Toss-up

Ammar Campa-Najjar (D) – Consultant; 2018 Finalist – 36.3%
Darrell Issa (R) – Former Congressman; Businessman – 23.5%
• Though Democrat Campa-Najjar finished first in the primary, the combined Republican vote looks to exceed 56 percent. Former Rep. Darrell Issa (R), coming into a new district in this rural San Diego County region, now is in the driver’s seat for the general election and is favored to win. The seat will be vacant until the next Congress. Rep. Duncan Hunter (R) resigned earlier this year, and Gov. Gavin Newsom (D) announced there will be no special election called for this seat. Likely Republican

Sara Jacobs (D) – Former State Department Official – 29.2%
Georgette Gomez (D) – President, San Diego City Council – 20.4%
• Rep. Susan Davis (D-San Diego) is retiring, and she will be replaced by a Democrat. With two party members advancing into the general election, the only question that remains is which of the two individuals will succeed Rep. Davis, who is leaving Congress after serving what will be ten terms in the House once the current session concludes. Wealthy former Obama State Department official Sara Jacobs and San Diego City Council President Georgette Gomez will now duel for the right to next represent the district. Safe Democratic