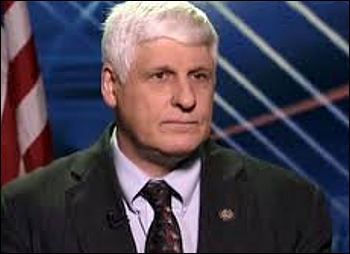 Aside from Miller, the Republican field is weak, obviously because Gibbs was running. The remaining qualified Republicans in addition to Miller are financial executive Charlie Gaddis, computer technician Brandon Lape, and non-profit group founder Jonah Schulz. Miller is the clear fundraising leader at $1.8 million raised at the end of 2021, with just under $1 million in his campaign account. Under the original redistricting map, Miller was running in open District 13. 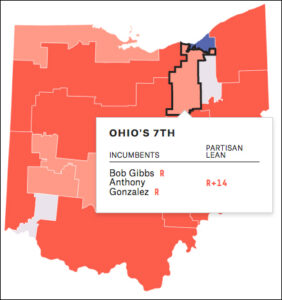 Had it been clear that the 7th District seat would be open, the Democratic field would be stronger, too. The Dem field is comprised of podcast host Matthew Diemer, music festival producer Patrick Malley, and community organizer Tristan Rader. Of this group, the top fundraiser through the end of last year was Diemer at $91,303 in receipts.

Gibbs is also correct that 90 percent of the new 7th District does not come from the current CD-7. In fact, two-thirds, or more accurately 64.9 percent of the new draw, comes from retiring Rep. Anthony Gonzalez’s 16th CD, the seat that was collapsed because Ohio lost a seat in national reapportionment. In this second map, Rep. Gibbs’ current 7th is dispersed into six different districts.

The current OH-7 begins in the Canton area and sweeps south and west into central Ohio. It then juts north into the Cleveland suburban area annexing places such as the cities of Wooster and Ashland, before traveling almost to Lake Erie, ending just north of the town of Avon.

The new 7th begins in the western Cleveland suburbs and runs due south to pick up the cities of Medina, Wadsworth, and Westwood, among others. This second OH-7 version rates a relatively strong R+14 according to the FiveThirtyEight data organization. Dave’s Redistricting App, the other data entity that scores all of the new districts rates the average Republican percentage at 53.6, with the Democrats typically scoring in the 44.1 percent range.