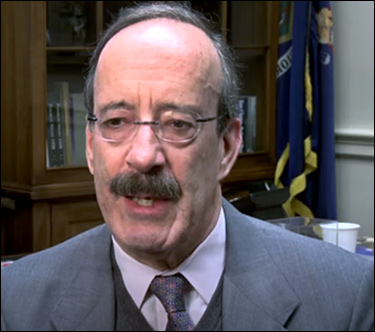 The Engel campaign spokesperson further countered the Bowman poll’s findings, saying that the congressman’s most recent internal Global Strategy Group survey gives the incumbent an eight-point advantage. The Engel campaign, however, will not release their GSG data.

This campaign kicked into high gear in early June after Rep. Engel was captured on video as telling Bronx Borough president Ruben Diaz, Jr., when attempting to address the Diaz’s local meeting about the COVID-19 virus, that he “wouldn’t care (about speaking) if he weren’t in a primary.” Diaz had told the congressman that he was not allowing the many elected officials present to address the meeting attendees, which prompted the Engel rejoinder.

The veteran congressman and chairman of the House Foreign Affairs Committee had already come under attack from the Bowman campaign about being absent from the district since the COVID-19 crisis began. His opponent had already been making the point that Rep. Engel self-quarantined at his home in Maryland, and only returned to his New York City district to begin campaigning once it was clear that the Bowman challenge was becoming serious. Rep. Engel’s videoed conversation with Diaz then became perfect fodder for Bowman’s attack ads.

Before releasing their poll findings, Bowman’s campaign financed a wave of attack ads against Engel hitting him for remaining in Maryland and then only returning to the district when his political position became endangered and included video footage of Engel’s conversation with Diaz.

The Engel campaign retaliated with their own attack ads calling out Bowman for not even becoming a registered Democrat until 2018. They produce documentation that Bowman was a member of the Independence Party, a minor NY political party that controls a ballot line in various elections and is notorious for granting their official endorsement to the major party candidate willing to contribute the most money to their organization.

The Engel campaign is quick to point out that Bowman was a registered Independence Party member when the group awarded their statewide ballot line to John McCain over Barack Obama in the 2008 presidential campaign and accuses him of not being a “real Democrat.”

The second line of Engel’s attack points out that Bowman’s school is below standard in student performance in math and English, and even worse than most of the commensurate schools within low income urban school districts. He thus attacks Bowman as being a substandard educator.

Momentum is clearly with Bowman, but whether it will be enough to overcome the veteran congressman’s get-out-the-vote organization remains to be seen on Tuesday night. The 16th District race is fast becoming the contest to watch in the New York primary.