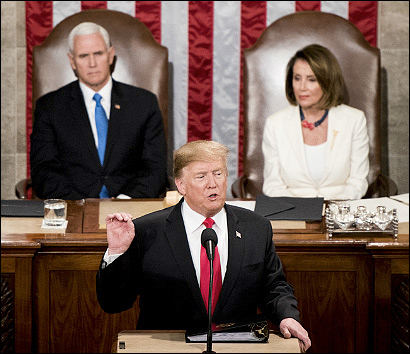 President Trump, calling on the Congress to stop socialism, and his attack on the recently passed New York live birth abortion bill coupled with mentioning Virginia Gov. Ralph Northam’s statement seemingly supporting post-birth abortions, attempted to isolate his adversaries politically as a small minority while seeking to align himself with the majority opinion concerning these controversial subject areas.

It was also telling to observe what the president didn’t mention. At least two key areas were not part of the SOTU text likely because he and his advisors probably perceive the Democrats as having the upper hand in those areas. The speech contained no mention of climate change, and only briefly touched upon education. Polling consistently shows the Democrats maintaining clear advantages on environmental and education issues.

In the meantime, his eventual general election opponent may well have been in the House chamber on Tuesday night listening in person to his speech. Sens. Bernie Sanders (I/D-VT), Kamala Harris (D-CA), Kirsten Gillibrand (D-NY), Elizabeth Warren (D-MA), and Cory Booker (D-NJ) have either announced their candidacies or formed a presidential exploratory committee. It is reported that Minnesota Sen. Amy Klobuchar will follow suit this coming weekend. At various times during the speech their reactions to his various points were purposely captured by the television cameras.

Though we are still one year away from the first votes being cast in the Iowa Caucus and California primary, the campaigns are already beginning to form in earnest. On Tuesday night, President Trump clearly and boldly stepped back into the political campaign ring.