Since the top three contenders finished close to one another, delegate apportionment is tight. With just 24 first-ballot delegates to be earned here, Sen. Sanders and Buttigieg look to be awarded 9 bound votes apiece, while Sen. Klobuchar will take the remaining 6 votes. 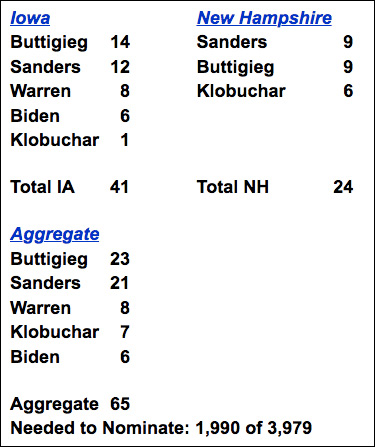 Though Sen. Sanders finished first last night, his New Hampshire performance must be considered a disappointment when remembering that he received 60 percent of the vote here four years ago in his one-on-one match with Hillary Clinton. Therefore, the two candidates gaining the most from the first-in-the-nation primary are actually the Midwestern candidates, Buttigieg and Klobuchar, and not the New England pair of Sanders and Warren.

After the first two voting events, we see Sen. Sanders scoring a pair of first-place finishes in the popular vote category, yet he still trails slightly in the aggregate bound delegate count. Turnout for the 2020 New Hampshire primary exceeded the participant level from four years ago, an increase of just over 10 percent.

We now have an 11-day respite until Nevada voters attend their caucus meetings on Feb. 22. A week later, South Carolinians will vote in what has now become the most important of the first four states. Biden’s back will be against the wall in the Palmetto State and a victory there – he has been dominant in polling for better than a year in South Carolina – will be essential for him continuing in the race. Also, look for billionaire Tom Steyer to attempt to make a serious move in South Carolina, and it is possible he could score a few bound votes in Nevada’s delegate apportionment mix, as well. He has been flooding the airwaves in the Silver State with TV ads.

Also filing for the Super Tuesday states is former New York City mayor, Michael Bloomberg, and with his copious spending he, too, could be in delegate apportionment position in several of those places. This means, at the end of Super Tuesday, we could see as many as seven candidates with bound delegate votes, and no leader clearly emerging.