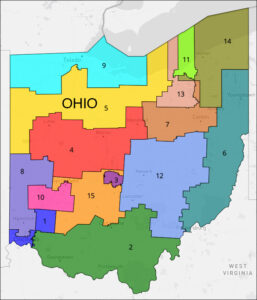 Ohio candidate filing under the map in question occurred earlier in the year. As mentioned above, the May 3 state primary will now feature the congressional elections, but not races for the state legislature due to court decisions. Nominations in these latter campaigns will be determined in a yet-to-be-scheduled second primary. 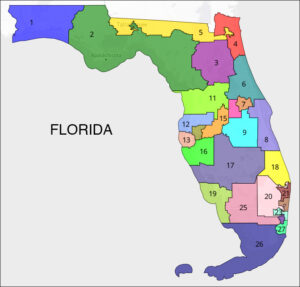 Click on map or here to go to: Interactive Florida Congressional Redistricting map.

As he promised, Gov. Ron DeSantis (R) vetoed the Republican legislature’s congressional map as soon as it hit his desk, because the draw did not change northern Florida’s minority district. The governor says the legislature’s map violates the Voting Rights Act, in that the statute is interpreted incorrectly. US Rep. Al Lawson (D-Tallahassee), who represents the district in question, and many others dispute the governor’s reading of the Act.

The legislative leaders will not attempt to override the governor’s veto and instead proceed to a special redistricting session to occur during the April 19-22 period.

Under the legislature’s vetoed plan, Republicans would likely have increased their share of the Florida delegation from the current 16R-11D division to 18R-10D when including the new seat that the state earned through national reapportionment. The map Gov. DeSantis favors could push the GOP total higher.

The Florida plan is now the Republicans’ most important because it is likely the only place where they can gain more than one seat through redistricting.

With the court decision in North Carolina going against them, a swing of five seats in that state alone could occur. Examining the Republican draw, the GOP could have gained as many as three seats in the Tar Heel delegation. Under the court map, it’s possible that Democrats will now gain two. Therefore, a favorable Florida resolution becomes critical for Republican national electoral prospects.

The Florida candidate filing deadline is scheduled for June 17 for the associated Aug. 23 primary election.