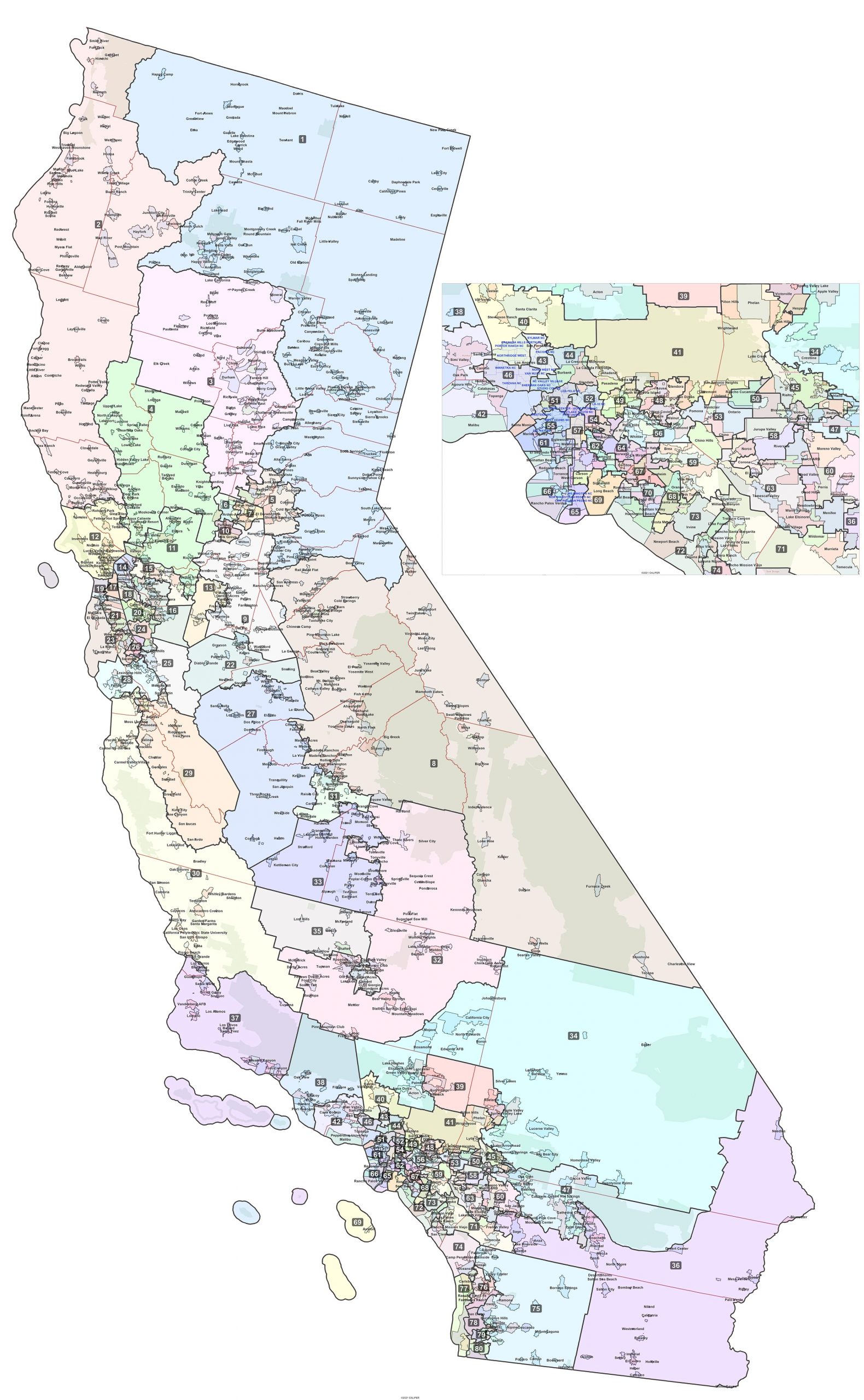 Click on map of California above for detailed view

Jan. 3, 2022 — The California and New Jersey redistricting commissions are completing the last steps of passing what look to be the final congressional plans for each state. The cursory analysis suggests that Democrats may gain a seat in California with Republicans doing likewise in the Garden State.

The California Citizens Redistricting Commission members approved and sent toward final adoption a new 52-district congressional map that could give the Democrats even more seats in the delegation, though we will see several more competitive districts come into play. California lost one seat in reapportionment and Democrats are taking the loss of one of their Los Angeles County seats, but look to be replacing it, and then some, in other parts of the Golden State.

The 47th and 40th Districts of retiring members Alan Lowenthal (D-Long Beach) and Lucille Roybal-Allard (D-Downey) were combined to construct a new 42nd CD, which is heavily Democratic. Rep. Karen Bass (D-Los Angeles), who is leaving the House to enter the campaign for mayor of Los Angeles, sees her 37th District, which was on the chopping block in the first draft map, restored almost intact.

Major change is occurring in the Central Valley. Rep. Josh Harder (D-Turlock) sees his 10th District going from an R1 rating according to the FiveThirtyEight statistical analysis organization to R17. Therefore, it is unlikely he will run in his new designated 5th District.

Rep. Jim Costa (D-Fresno) may leave what is a new 13th District at D7 and move to the downtown Fresno seat, now labeled District 21. This seat has much of resigning Rep. Devin Nunes’ (R-Tulare) territory but is rated a D16. Rep. Costa choosing the 21st might allow Rep. Harder to drop down into new District 13, which would be a much more favorable partisan situation but takes him away from his geographical base.

Rep. Mike Garcia (R-Santa Clarita), who won his 2020 election by just a 333-vote margin, sees his designated district, now numbered 27, become at least three points more Democratic. This endangers even further his re-election chances. The 538 organization rated his current 25th CD as a D5. The new 27th becomes a D8.

Several Republicans have proven they can win these D-plus single digit type seats, however. In addition to Rep. Garcia’s two victories in current CD-25, Rep. David Valadao’s (R-Hanford/Bakersfield) 21st district is rated a D9. His new seat, designated District 22, goes to a D10. Another option for him would be to also run in District 13 (D7), which contains some of his current territory. Rep. Young Kim (R-La Habra) won a 39th District that FiveThirtyEight rated as a D6. Her new 45th CD is calculated at D5.

We could possibly see a district swap operation between Reps. Zoe Lofgren (D-San Jose) and Jimmy Panetta (D-Carmel Valley) due to geography, and between Reps. Michelle Steel (R-Orange County) and Katie Porter (D-Irvine) for partisan reasons.

Rep. Steel’s district moves from a R2 to a D6, while Rep. Porter’s adjacent CD shifts in the opposite direction, going from a D6 all the way to a R4. The problem can be solved for both members by them simply switching districts. This would mean Rep. Porter would run in the new coastal 47th with Rep. Steel going to the inland new 40th.

Rep. John Garamendi (D-Walnut Grove) gets a solid Democratic district, but its new positioning is unfavorable to him from a geographic perspective. Garamendi’s new 8th District moves closer to the San Francisco Bay Area making him vulnerable to a challenge from a Bay Area Democratic state or local official. It is likely this new Vallejo-anchored CD would produce a double Democratic general election under the state’s top two jungle primary system.

Several members see their districts downgraded from a partisan perspective. Rep. Tom McClintock (R-Elk Grove/Sacramento) goes from R15 to R8 in a new 3rd District that stretches into southern California along the Nevada border. 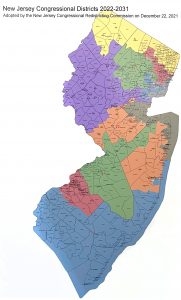 Click on map of New Jersey above to see detailed view

It appears that the New Jersey Redistricting Commission comprised of six Democratic elected officials, six similar Republicans, and a state Supreme Court selected tie-breaking member, have also agreed upon a new congressional map. New Jersey’s representation level remained constant with 12 seats, so it was a matter of adjusting the current districts.

It is evident that the rumor suggesting the commission would adopt a map that drastically weakened Rep. Tom Malinowski’s (D-Rocky Hill) seat in order to strengthen three other Democratic districts, those of Reps. Andy Kim (D-Bordentown), Josh Gottheimer (D-Wyckoff), and Mikie Sherrill (D-Montclair/Morristown) proved true.

While the NJ Democrats are securing three of their more politically marginal districts, Districts 3, 5, and 11, Republicans appeared poised, probably in the person of state Senate Minority Leader Tom Kean Jr. (R-Edison) who held Malinowski to a 51-49 percent win in 2020, to convert the new 7th CD.

More research will be done on the likely-to-be-adopted California and New Jersey congressional maps when detailed district descriptions become available. It looks like several incumbent members will have decisions before them about where to run in California, while the focus of the New Jersey competitive action will center around the District 7 Malinowski-Kean re-match.