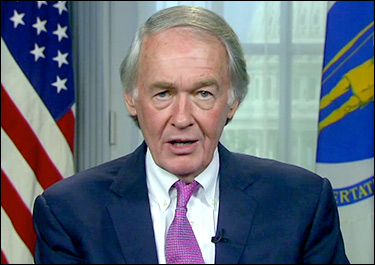 Though Sen. Markey’s vulnerability is being overstated, he does show some weakness as is evidenced in the name ID/favorability index question results. His positive ratio of 39:25 percent is low for an incumbent among respondents who predominantly vote for candidates of his or her own party.

Another troubling point is that 36 percent of the tested sample either claim they have never heard of Sen. Markey (14 percent) or are undecided about their impression of him (22 percent). Both responses are surprisingly high for an incumbent who has been a factor on the Boston political scene in either the state legislature, US House, or US Senate since the 1972 election.

Sen. Markey is promoting his own liberal bona fides by highlighting that he is the lead Senate author of the Green New Deal and claims leadership of the anti-Trump movement in Congress. His leftward opponents’ attacks on environmental issues won’t fly because Markey has long been a congressional leader and bill sponsor of climate legislation, but it does appear a significant sweep for the senator to claim he is the president’s top congressional opponent.

Even successfully promoting himself as the cornerstone of the Massachusetts anti-Trump faction may miss the mark, however. Though the state will again overwhelmingly vote for the Democratic nominee over Trump next year, they are against impeaching the president by a 49-42 percent margin, and two-thirds of the polling sample thinks that Republican Gov. Charlie Baker should run for a third term.

Sen. Markey is readying his campaign for a strong primary challenge. During the first quarter he reported having over $3.5 million in his bank account, and much more is expected in the soon-to-be released 2020 election cycle second quarter financial disclosure report. But the Markey opponents are quick to respond that Rep. Capuano also outspent Pressley by a substantial 3:1 margin, yet the former congressman was still unseated by a wide margin.

There is reason to keep an eye on this developing Democratic primary campaign, but looking at the Massachusetts political picture in its totality, very long odds should be cast over whether 2018 Democratic primary history will repeat itself when voters choose their state primary nominees in September of next year.