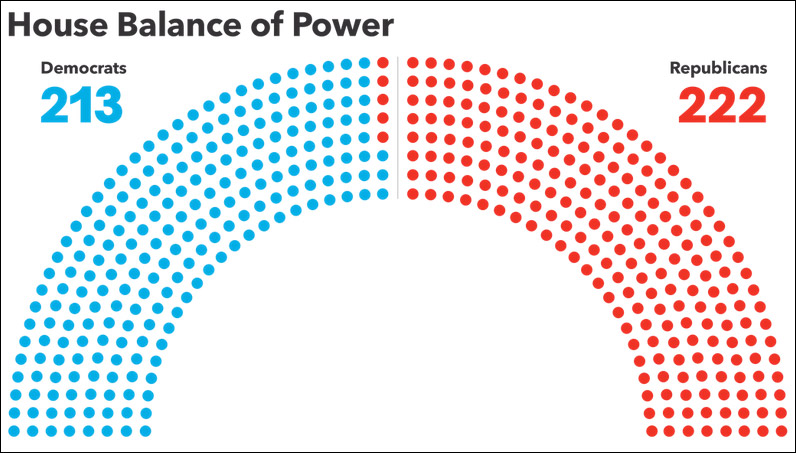 Reassessing Republican Performance — It is a common analysis that the Republicans under-performed in the 2022 election, but a closer inspection of the final US House results suggests such a conclusion may be somewhat unwarranted.

It is certainly clear that the Republicans fell below the congressional leadership and conservative media’s expectations, but the flaw may have been unrealistic predictions instead of candidates falling woefully short at the ballot box.

First, the Daily Kos Elections blog conducted an analysis of all 435 districts once the 50 post-redistricting state maps were in place. The DK researchers calculated the 2020 Biden-Trump presidential results for all 435 congressional districts and found that the national Democratic nominee carried 226 seats from the grand total, therefore suggesting that the final redistricting maps actually favored the Democrats and not the Republicans.

Therefore, seeing 222 seats in a new Republican majority when the opposing party had the advantage in 226 seats possibly puts the final result in a different light.

These latter figures tell us that the new redistricting maps accurately reflect the national vote count, at least in relation to the 2022 election. This, too, shows that the Republicans gaining 222 seats when their national vote would project to 221 was not the poor performance that many believe occurred.

Another common statement surrounding Republican 2022 performance in House races is the party left too many close contests “on the table.” The numbers pertaining to this observation also tell a different story.

In the 25 closest House races, Republicans won 15, including the five overall closest results. Looking at the 10 Democratic wins in this category, there is an argument to be made that the outcome could have realistically changed in only four of these hotly contested campaigns. Thus, if the Republicans won the reasonable “races on the table” their majority would have grown to only 226.

The six tightest races that statistics suggest should have gone to the Democrats are:

• NM-2: Las Cruces City Councilman Gabe Vasquez (D) defeated Rep. Yvette Herrell (R) due mainly to redistricting. The Democratic map drawers changed the 2nd CD from a seat that favored Republicans by 14 points to a new domain giving the Democrats a four point statistical advantage. These numbers are from the FiveThirtyEight data organization calculations. Therefore, the Democratic candidate scoring a 50.3 percent victory is actually a bit below what was expected.

• CT-5: Connecticut Rep. Jahana Hayes (D-Wolcott) won a third term, but in a closer-than-expected finish, taking just 50.4 percent of the vote in a seat rated D+3. Again, statistics suggest that this is a Democratic district, and especially so with an incumbent on the ballot.

• NY-18: Another district where the Democrats were favored (D+3) went to 19th District special election winner Pat Ryan (D-Gardiner). He defeated a strong Republican effort from then-state Assemblyman Colin Schmitt with only 50.6 percent of the vote.

• OR-6: The surprise of this race is how close Republican Mike Erickson came to scoring an upset victory in a district rated D+7. State Rep. Andrea Salinas (D-Tigard) won the election, but her 50.0 – 47.5 percent margin should have been greater.

• RI-2: Republicans had high hopes that former gubernatorial nominee Allan Fung could upset then-state Treasurer Seth Magaziner (D-Cranston) in a seat rated D+17. Such expectations proved unrealistic, but Fung did hold the new Congressman to only a 50.4 winning percentage.

• CA-47: Rep. Katie Porter (D-Irvine) was always favored to defeat former state Assemblyman Scott Baugh (R), and did so by a 51.7 – 48.3 percent vote spread. She outspent Baugh by a $25.7 million to $3.1 million ratio, thus overwhelming her opponent with resources.

The four races Republicans might have turned around were:

• CO-3: The FiveThirtyEight organization rated this toss-up seat as R+3, but Democratic state Rep. Yadira Caraveo (D-Thornton) was able to secure a tight 48.4 – 47.7 percent victory over state Sen. Barbara Kirkmeyer (R) in an even race that easily could have gone in either direction.

• PA-7: Rep. Susan Wild (D-Allentown) was one of the Democratic incumbents who didn’t fare well from the state Supreme Court redistricting map. The court draw turned the seat to R+4, thus giving 2020 nominee Lisa Scheller (R), who lost that race 52-48 percent, a very credible victory path. She was unable to convert the 2022 race, however, and Rep. Wild recorded a 51-49 percent win.

• NC-13: The North Carolina state Supreme Court drew a new 13th District in the south Raleigh suburbs that stretched to include the city of Fayetteville. The FiveThirtyEight organization rated this a R+3 district, but the campaign appeared closer once polling began. Democrats fielded the superior candidate in state Sen. Wiley Nickel opposite 27-year-old Republican Bo Hines who lacked a strong personal resume. Sen. Nickel won the race with a 51.5 – 48.4 percent vote margin.

As mentioned before, if Republicans had flipped all four of these latter most winnable campaigns, the final result would still have been far under the majority number that most people believed the party would reach. In the end, it appears the pre-election estimates were the most inaccurate part of the 2022 political equation and not the overall Republican performance.

On Monday, locally well-known community activist and fitness business owner Dom Jones (D) declared her candidacy, joining fellow Democrats Harley Rouda, a former one-term congressman looking to return to Washington, and state Sen. David Min (D-Irvine) who already has Rep. Porter’s endorsement. On the Republican side, former state Assemblyman Scott Baugh, who held Rep. Porter to a 51.7 – 48.3 percent victory margin last November, confirms that he will be back for the open seat race. IT consultant Brian Burley (R) has also announced his intention to compete for the office.

Gallup: GOP Leads in Party ID for First Time Since 1991 — The Gallup research organization, as part of their Gallup Poll Social Services series (throughout 2022; 12 surveys; 10,000 live interviews; US Adults) concluded last week that 45 percent of their respondent universe identified as Republican or Republican leaning as opposed to 44 percent who align themselves with the Democrats. In the initial questions, the Independent classification led with 41 percent preference, with the two major parties tied at 28 percent apiece. The Independents were then questioned as to which party they more closely identified.

Though this is the first time in more than three decades that cumulative Republicans topped cumulative Democrats, the two entities were tied during both the 2003 and 2011 Gallup partisan identification report. The Democrats’ biggest advantage came immediately after President Barak Obama’s initial election when their cumulative total rose to 52 percent, while the Republicans sunk to 40 percent.