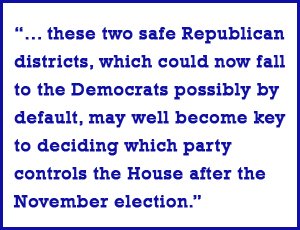 First, the candidate passes away. Second, he or she moves away from the state, and third, he or she is nominated for another office. New York is the only state that now has two primaries, one for federal races in order to comply with the federal MOVE Act that requires 45 days notice of an election for those overseas and military voters who want the opportunity of mailing a ballot to the proper election authority, and another months later for state offices.

It appeared that moving from New York might be Collins’ answer especially since the congressman owns a home in Florida, but a judicial ruling in a previous case set the precedent that moving away after the primary does not necessarily mean candidate status ends. Therefore, Collins moving out of the state may not allow the local GOP to select a new candidate.

The third way, a contender is nominated for another office, would be difficult to implement in Collins’ situation since candidate filing for other state and local offices has long passed, even though the New York state primary will not occur until Sept. 13.

However, the aforementioned impediments are not stopping the district’s eight Republican county chairmen from interviewing possible replacements for Rep. Collins. Reportedly, former gubernatorial candidate Carl Padalino, four state legislators, and three local officials have already appeared before the panel of local political chairmen, who alone would make the decision as to who will replace Collins on the congressional ballot.

The Democratic nominee is Grand Island Town Supervisor Nate McMurray. He had raised only $133,000 through the June 30 campaign finance disclosure deadline with just under $82,000 remaining in the bank, hardly the resources required to run a major congressional campaign.

The other candidate is Reform Party contender Larry Piezga, who is a former Republican.

Though the Republican leaders appear confident they can replace Collins, and are actively trying to do so, the actual outcome is much less certain. If Collins is forced to stay, it is unclear whether he will resume campaigning with the goal of winning the seat for the party, and then quickly resigning.

It appears what happens next on the Upstate New York political scene is difficult to predict at this point in time.

The California situation is more cut and dried. The Golden State employs the jungle primary system, so no party is awarded any general election slot. Since all candidates run on the same ballot and the top two finishers advance to the general election regardless of political party affiliation, there are no party nominees. Therefore, if Hunter were to withdraw from the race, the Republican Party officials would have no recourse or ability to replace him.

The second-place qualifier is Democrat Ammar Campa-Najjar, a communications consultant and ex-US Labor Department official. He received 17.6 percent of the primary vote among six other candidates including Rep. Hunter who placed first with 47.4 percent. In anticipation of a possible Hunter indictment, Campa-Najjar had raised just over $1 million for his campaign, but held less than $280,000 in his campaign account due to spending for the June 5 qualifying election.

In this case, it is likely that Hunter will continue his campaign. The congressman withdrawing from the race would cede the seat to Campa-Najjar, since he is the only person whose name would appear on the ballot.

If the House majority comes down to just a few seats, these two safe Republican districts, which could now fall to the Democrats possibly by default, may well become key to deciding which party controls the House after the November election.