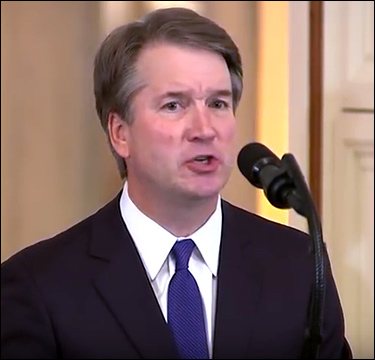 But, the aforementioned are not alone. Seven other Democrats on the 2018 ballot come from states that the president carried, including Montana (Sen. Jon Tester) and Missouri (Sen. Claire McCaskill) where the respective 20-point and 19-point Trump victory margins were obviously substantial.

Among five Democratic senators who publicly stated Monday night they will oppose the Kavanaugh nomination post-announcement, in addition to the party leadership, is Pennsylvania Sen. Casey who is from one of the states Trump carried with a plurality. Two more are members of the confirming Senate Judiciary Committee — Sens. Kamala Harris (D-CA) and Cory Booker (D-NJ).

Another pair who can expect extreme pressure from both sides are the new Democratic senators: Doug Jones, who won the 2017 Alabama special election to replace attorney general and former Sen. Jeff Sessions (R), and appointed Minnesota Sen. Tina Smith (D), who is resigned Sen. Al Franken’s (D) replacement. Sen. Jones, however, is not on the 2018 election ballot. He next comes before the voters in 2020.

The body’s other new senator, appointed Republican Cindy Hyde-Smith of Mississippi, can be expected to support the nominee. She, too, will be on the ballot later this year and comes from a state that Trump won with an 18-point margin.

The lone Republican on the ballot from a contested state is Nevada Sen. Dean Heller. Obviously, the two other Republicans who will receive intense pressure are Alaska’s Lisa Murkowski and Susan Collins of Maine.

In addition to healthcare, abortion, and free speech issues, we can expect concentrated lobbying over gun control. How the persuasion campaign and the eventual responses to such unfold will greatly impact the fall Senate campaigns and may be determinative in more than one political situation.