May 8, 2017 — Arizona US Rep. Kyrsten Sinema (D-Phoenix) announced at the end of last week in a Phoenix radio interview her intention to seek re-election next year, meaning she will not become a US Senate candidate.

Most observers believed she would be the strongest Democrat to oppose first-term Sen. Jeff Flake (R), and her robust first-quarter fundraising activity seemed to suggest she had something in mind beyond simply securing what was once a politically marginal district.

In the quarter, Rep. Sinema raised just short of $678,000, and holds a whopping $2.8 million cash-on-hand. This latter number is one million dollars more than even Sen. Flake’s reported total. The senator was more aggressive in the first quarter, however, raising $1.3 million in 2017’s opening months, but began with less in his campaign account.

Sinema backing away from a Senate challenge doesn’t mean Sen. Flake is home free, however. His intra-party battle scars from a national feud with then-candidate and later Republican nominee Donald Trump have not fully healed, so the senator harbors some GOP primary vulnerability at the very least. And, a wounded incumbent moving into the general election from a state with the capability of electing someone from the other party is not a scenario the national Republican Party leadership wants to see.

Currently, the senator’s announced primary opposition — former state Sen. Kelli Ward, who held veteran Sen. John McCain to a 51.2 – 39.9 percent Republican primary win in 2016 — has little in the way of assets with which to oppose Flake. According to her 1st quarter financial disclosure report, Ward raised $168,369 and has just under $104,000 in her campaign account. 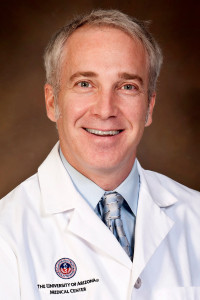 Dr. Randall Friese (above) could prove to be a formidable opponent should he decide to run against first-term Sen. Jeff Flake (R).

Ward is not Sen. Flake’s chief potential Republican threat, however. Waiting in the wings is state Treasurer Jeff DeWit, who has not yet entered the Senate race, but already has announced that he will not seek re-election to his current position. DeWit was President Trump’s Arizona campaign chairman, which could make this race all the more interesting if he were to become a Senate candidate.

Still, Sen. Flake’s electoral obstacles would not be in his rear-view mirror even if he only faces Ward in the primary and easily defeats her. With Rep. Sinema now out of the Senate race, a name moving up the Democratic potential candidate chart is state representative and doctor Randall Friese (D-Tucson), the surgeon who operated on former Rep. Gabrielle Giffords (D-Tucson) and saved her life from what easily could have been a mortal gunshot wound.

Several years after the Giffords surgery, Dr. Friese (left) decided to enter politics and was elected to the state House of Representatives in 2014, and then re-elected last November. He is now the body’s assistant minority leader. In addition to being an active trauma surgeon, the doctor is a professor of surgery at the University of Arizona College of Medicine.