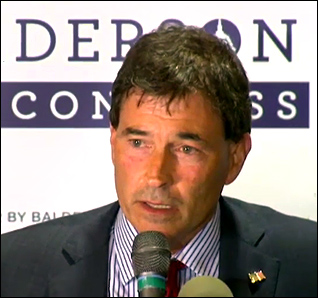 Aug. 9, 2018 — The OH-12 special congressional election drew major attention Tuesday evening as state Sen. Troy Balderson (R-Zanesville) and Franklin County Recorder Danny O’Connor (D) battled well into the night before it became clear that the GOP had again escaped with a close victory. Despite the loss, Democrats began looking toward November as they made the point that their candidate exceeded typical voting patterns in what should be a Republican district.

Though approximately 3,300 provisional ballots remain uncounted, it is likely too small a number to eradicate a 1,754-vote margin. But, approximately 5,000 absentee ballots that were requested and mailed to the voter have yet to be returned. It is unclear just how many from this group are on the way to the appropriate elections officer. But, the outstanding votes didn’t prevent the GOP leadership from introducing Balderson as the new “congressman-elect.”

Prior to the election, the Daily Kos Elections Page featured a set of predictions from David Jarman, one of the site’s principals, who developed a model posting Democratic benchmarks for every county throughout the district. The numbers represented the percentage that O’Connor would need to obtain in order to score a bare 48-47 percent win over Sen. Balderson.

The prediction chart proved almost precisely accurate. Over-estimating the percentages that Green Party nominee Joe Manchik received was the only flawed calculation. The Jarman prediction suggested that Manchik would garner in the neighborhood of five percent, but the actual figure was only 0.6 percent.

With the election unofficially ending at 50.1-49.3 percent (0.6% percent in Balderson’s favor), the prediction obviously slightly underestimated the Republican nominee’s support base, while similarly over-emphasized the Democratic vote.

In order for O’Connor to win, and these numbers will be similar for the impending November election between the two, a huge vote spread was/is needed in Franklin County.

According to the Jarman projection, the Democratic margin needed to be 63 percent if Balderson drew 32 percent. Tuesday night’s vote percentages were 65.0–35.6 percent, slightly above both the Democratic and Republican benchmarks, but with almost the exact 31-point predicted spread between the two.

Turning to the most Republican counties — Morrow and Marion — O’Connor needed to pull 29 and 30 percent, respectively, assuming Balderson scored 67 and 66 percent. In actuality, Balderson’s margins were 70-29 and 68-31 percent. Therefore, Balderson ran slightly ahead of projection as did O’Connor.

In three important similar counties, adjacent Licking and Muskingum and Richland in the northern part of the district, O’Connor needed to record 39 percent in each place while holding to Balderson to 56 percent. The Republican ran considerably ahead in Licking while the Democrat was slightly behind: 61-38 percent. Both candidates ran slightly ahead of projection in Richland (59-40 percent), while Balderson moved well ahead in Muskingum: 66-33 percent.

Thus, the election would come down to marginal Delaware County, situated just north of Franklin. O’Connor would need to score much better here than Hillary Clinton did in 2016, and reach 45 percent of the vote while holding Balderson to 50 percent. But, while O’Connor hit 46 percent, Balderson almost touched 54 percent, which ultimately allowed him to claim victory.

The Daily Kos prediction was interesting and allowed for better monitoring of the election returns. While it was clear that O’Connor reached his vote goal in dominant Franklin County, the rural areas proved to be what saved Balderson. Based upon typical midterm turnout predictions for the fall, they likely will be again.