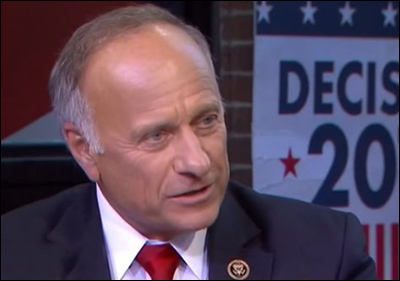 According to the survey analysis, Rep. King only leads within his conservative base by a single percentage point, while Sen. Feenstra secures a 12-point advantage among those who describe themselves as either “moderate” or “liberal” Republican voters.

The geographic dispersion is even deeper. Iowa’s 4th District sits in the state’s north/ northwest section beginning at the Nebraska-South-Dakota-Minnesota border and stretching just past Mason City in the north, then down through Ames and close to the Des Moines suburbs in the south, and then back toward the western border to encompass the Fort Dodge and Sioux City areas.

In Sen. Feenstra’s home Sioux County base, he dominates. In this geographic sector, where both candidates are well known, Rep. King trails by a whopping 21 percentage points. In the areas in which Feenstra is far less known, i.e., the Des Moines media market and the central rural areas, Rep. King still maintains a substantial 10-point lead in the former and a strong 18-point advantage in the latter domain.

It is in the areas outside of the far northwestern region where the Feenstra financial advantage will pay dividends. In the remaining days, it is the challenger who will have the resources to become better known in his weaker areas in order to cut King’s deficit while strengthening his voter turnout operation where the Feenstra campaign apparatus already dominates.

Considering Rep. King’s baggage and Sen. Feenstra’s strong record and campaign, we could well see the second incumbent of the election cycle soon being denied re-nomination in his party primary.

There are three other candidates on the Republican ballot, and though none of them are registering significant levels of support, there is a caveat in Iowa election law that could send the contest into a post-primary district convention. If no candidate receives 35 percent in the primary election, party delegates will convene weeks later to choose the nominee in a convention vote.

Since the polling has consistently shown the minor candidates not receiving enough support to keep the leader under 35 percent, it is likely this race will be decided on June 2.