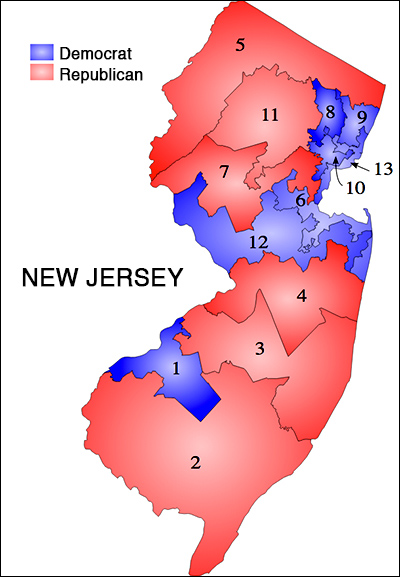 Van Drew faces his first election on the Republican ballot, and the GOP leadership has done a good job of clearing the primary field for him. Often, the first primary election in a switcher’s new party is his or her most difficult. Only Bob Patterson, a previous candidate who originally entered the campaign to oppose Van Drew when he was still a Democrat, remains in the Republican primary. It appears two of the five candidates who filed for the Democratic nomination are credible, one of which will advance into the general election.

Anne Kennedy, a mental health advocate who is married to former Rhode Island Rep. Patrick Kennedy, is also in the race and gained the Atlantic County Democratic Party endorsement. The latter is the largest county in the CD. The general election will be competitive, but Rep. Van Drew must be considered the favorite as the future Republican nominee in a district that had been in GOP hands since the 1994 election prior to his own win as a Democrat in 2018.

Third District freshman Rep. Andy Kim (D-Bordentown), who nipped then-Rep. Tom MacArthur (R) by just over 3,900 votes, will face another tough campaign this year. The Republican leadership convinced multi-millionaire David Richter to move into this district to challenge Kim after he was well underway with a primary offensive to new Republican Rep. Van Drew in the adjoining district.

Republicans already had former Burlington County Freeholder Kate Gibbs in the 3rd District race, but Richter moving here certainly made more sense to the party leadership. Gibbs remains, but Richter should be considered the favorite for the nomination and will be formidable in the general election in what is typically a tight Republican district.

Democrats don’t look as strong against Rep. Smith this year. Two years ago, party nominee Josh Welle spent close to $2 million, but didn’t fare any better than a 55-43 percent loss. This year, the Democratic field is weaker meaning Smith is favored to win a 21st term in November, returning to the House where next year he will become the third longest serving member.

Democratic Rep. Josh Gottheimer (D-Wycoff/Hackensack) defeated then-Rep. Scott Garrett (R) in the 2016 election and seems to have locked down what was once a reliable Republican seat. The GOP will try again here, but Rep. Gottheimer with his prodigious fundraising ability (in 2018, he raised almost $7 million and spent just over half) is a clear favorite for re-election despite being in a district that President Trump will likely carry again in 2020.

Freshman Rep. Tom Malinowski (D-Rocky Hill/Westfield) is another of the mega-Democratic fundraisers having raised just under $6.2 million in 2018 to unseat veteran Rep. Lance. This year, the Republican leadership was able to convince credible candidate Rosemary Becchi not to challenge state Senate Minority Leader Tom Kean Jr. in the party primary and instead run in the neighboring 11th District. This allows Kean, who will be a strong challenger though he has previously lost congressional and statewide races, to focus on a sole contest against Malinowski. The 7th is a traditionally Republican seat, so this political battle looks to be a top-tier national challenge race come November.

The traditionally Republican 11th District, anchored in Morristown, was an open seat in 2018 and went Democratic in a big way in the person of Naval Academy graduate Mikie Sherrill. One of the top open seat fundraising candidates in the nation, Sherrill attracted almost $8 million to capture a 57 percent win in a district that hadn’t elected a member of her party since 1982.

At the end of 2019, the congresswoman had already attracted another $2.6 million for her re-election effort and now she will face Becchi. The latter woman, an attorney and former congressional aide with strong ties to north/central New Jersey, put almost $550,000 in her campaign account before year’s end signaling that she will be a formidable challenger in the fall.

While a race against Sherrill looks more difficult than one against Rep. Malinowski, where Becchi was originally running, the fact that the party leaders cleared the Republican field for her in convincing her to move to the 11th means she can fully concentrate on the general election. Rep. Sherrill has to be rated the favorite for re-election, but the district still can elect a Republican.

New Jersey is a key state to watch in determining if the GOP will again be in reach of majority status in the House. In order to score the political comeback they want, the Republicans must regain some, if not all, of the seats they lost here in the last election. It does appear, however, that they have a strong enough challenger slate where attaining such an outcome becomes a reasonable possibility.