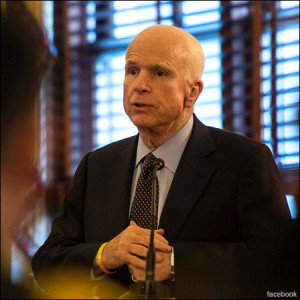 We will soon obtain a clue to his intentions. Arpaio indicates his campaign raised approximately $500,000 during the previous quarter with expenses in the neighborhood of $250,000. Once the Federal Election Commission disclosure reports are published, we will see a detailed account of how Arpaio is spending his money.

There are two schools of thought whether Arpaio remaining in the race or departing benefits McSally the most. Some believe the three-way race is to her advantage because Arpaio and Ward split the most conservative voter base, as this poll clearly depicts. Others think that McSally will have little trouble dispensing with Ward in a one-on-one primary contest.

Former Sheriff Arpaio is still very well regarded among these Republican primary polling respondents. He records a favorability index of 67:28 percent favorable to unfavorable. This compares to Rep. McSally’s 48:24, and Ward’s 46:26 percent ratios. In comparison, President Trump’s job approval among the polled Republicans is a robust 82:14 percent. Arizona Gov. Doug Ducey (R), who stands for re-election this year, registers a 59:26 percent approval score.

Scoring negative approval ratings are Sens. Jeff Flake and John McCain. According to this poll, retiring Sen. Flake’s job approval is a horrific 18:74 percent among members of his own party. The ailing Sen. McCain’s job approval is also a poor 24:72 percent favorable to unfavorable, with 77 percent saying he should retire.

Finally, the poll contains more bad news for the Republican congressional leadership. Despite having majority control, the GOP House and Senate leadership job approval rates only a 23:65 percent favorability index within their own Arizona voting base, another indication that Speaker Paul Ryan’s (R-WI) retirement doesn’t necessarily hamper rank and file Republican congressional candidates