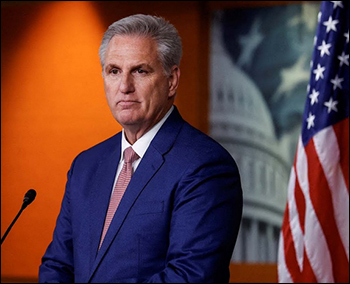 Speaker Vote Today: Likely to Require More than One Ballot — For the first time in a century, it appears the Speaker’s election that will convene the 118th Congress, will require more than one roll call. With Republicans holding only a 222-212 majority with one Democratic seat vacant due to the death of Rep. Donald McEachin (D-VA), Republican Speaker nominee Kevin McCarthy (R-CA) does not appear to have the 218 votes that he needs to claim the gavel for the ensuing session.

Five Republican members have publicly said they will vote against McCarthy, and one of them, Arizona Rep. Andy Biggs (R-Gilbert) is an announced candidate for the position as he was in the Republican conference vote. The other four are Reps. Matt Gaetz (R-FL), Bob Good (R-VA), Ralph Norman (R-SC), and Matt Rosendale (R-MT).

Another group of nine members signed a public letter questioning McCarthy’s ability to be a successful Speaker while stopping short of saying the signees will vote against him. They are Reps and Reps-Elect Dan Bishop (R-NC), Andrew Clyde (R-GA), Eli Crane (R-AZ), Paul Gosar (R-AZ), Andy Harris (R-MD), Anna Paulina Luna (R-FL), Andy Ogles (R-TN), Scott Perry (R-PA), and Chip Roy (R-TX). It is these 14 members who will be key on the first roll call. Not voting for McCarthy within this group will certainly send the voting to a second ballot.

The other group to watch, possibly led by Nebraska Rep. Don Bacon (R-Papillion/Omaha), are moderate Republicans who would coalesce with moderate Democrats to attempt to elect a compromise candidate. If the ballot drags on for more than two roll calls, it will be interesting to see which group begins to develop cracks. The membership will vote until one individual reaches the 218-vote threshold and thereby claims the Speakership.

Biden Approval: A Benchmark to Begin the Election Cycle — With the new Congress being sworn into office today, we begin the 2024 election cycle. Such being the case, let’s take a look at where President Biden’s job approval rating stands as he likely begins to prepare for a re-election run.

The two most recent survey reports during this holiday period came from Rasmussen Reports and the Morning Consult firm. Both organizations continually track presidential job approval on a daily basis. Rasmussen (sampling conducted through Pulse Opinion Research; Dec. 27-29; 1,500 US registered voters) projects the President to have a 47:51 percent favorable to unfavorable ratio. Morning Consult, which has been closer to a more consensus ratio among the plethora of typical job approval polling (Dec. 21-27; 45,000 US adults; online) finds Biden’s favorability index at worsened 42:51 percent favorable to unfavorable clip.

Comparing these two polls produces typical results since President Biden has always fared better with registered voter samples than among a respondent pool of adults. Still, it is clear that the president will begin the road to re-election with more people disapproving of his performance in office than those who approve.