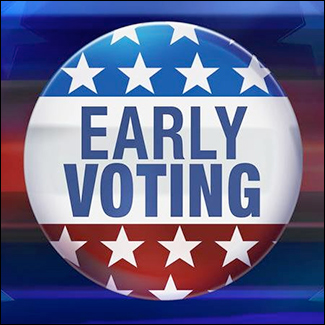 Early Voting Statistics — The Target Smart data organization continues to update early voting statistics from around the country, and we see several situations for both parties where the early vote totals in what should be more favorable states are showing a greater surge for the opposing party.

Of the key Senate races, we see four states where Republicans are either the incumbent party or should have a more favorable early vote performance, but Democrats are gaining the early edge: Iowa, Ohio, Pennsylvania, and Wisconsin. In four others, the GOP is performing better in places that are typically better for Democrats or where they have the incumbent candidate: Arizona, Colorado, Nevada, and New Hampshire.

Before delving into these key states, let’s take an updated look at Target Smart’s national report. Through Wednesday, Oct. 26, a total of 12,751,622 individuals have cast early votes in the 42 reporting states that employ an early voting procedure or are accepting and reporting mailed absentee ballots. At this point, 52.2 percent of the returned ballots come from Democrats, 37.9 percent from Republicans, and 9.9 percent from non-affiliated or independent voters.

Such a partisan pattern is consistent with previous years. Democrats tend to use early voting in a more prevalent manner than Republicans, with the GOP then dominating election day turnout. In comparison to the partisan complexion seen in 2020, so far, Democrats are up one full percentage point in the national early voting turnout while Republicans are down .4 percent. The non-affiliated total is down .6 percent.

These numbers are changing day by day, and now just about half-way through the early voting calendar, we can expect to see many differences occurring within the next week. The grand early vote total so far represents 31.1 percent of the aggregate number of people who voted early in the 2020 election.

Of the four states where Democrats have at least a preliminary advantage in early voting, the most significant are Pennsylvania and Wisconsin.

Pennsylvania — In the Keystone State, more than 683,000 people already have cast ballots. In 2020, a total of 1.179 million voted early according to Target Smart, so the 2022 number is a large sample. In 2020, just over 17 percent of the total electorate voted early.

Here, the Democrats have a wide advantage. A total of 73.4 percent of the recorded early vote are registered Democrats versus just 23.0 percent who are Republicans. These numbers represent a 6.3 percent increase in Democratic performance based upon 2020, while Republicans are down 2.8 percent.

Wisconsin — A little more than 302,000 people already have voted. Here, 39.9 percent of the early voters are Democrats, an improvement of 3.8 percentage points based upon their 2020 performance rate. Republicans are down a whopping 11.8 percentage points.

Iowa — Fewer than 100,000 people already have voted. Of those, 58.7 percent are registered Democrats, an improvement of 7.8 percentage points over the party’s 2020 performance. Republicans are just about even with their 2020 mark, down just half a percentage point.

Ohio — Numbers here also favor the Democrats. More than 529,000 people already have voted, which represents about 30 percent of the total early votes in 2020. A total of 44.2 percent of this year’s early voters are Democrats versus 40.3 percent who are Republican. This translates into a 3.0 percentage improvement for Democrats over their 2020 number, and a decline of 3.9 points for Republicans.

Republicans, however, are outperforming Democrats in another set of key Senate states.

Arizona — More than 530,000 people already have cast their 2022 midterm election ballot. This so far represents just over 50 percent of the number who voted early two years ago. Here, 48.0 percent of the voters are Republican, and 47.0 percent Democratic. These numbers represent a 2.6 percent increase for Republicans and a 1.2 percent decrease for Democrats.

Colorado — Surprising numbers are being seen here. In a state that has been moving decidedly toward the Democrats, it is the Republicans who have so far greatly increased their early voting participation rate.

Some 266,000 people have voted early this year in the Centennial State. This number represents just under a quarter of the number who voted early in 2022. A total of 49.3 percent of this year’s early voters are Democrats, down 4.4 points from two years ago. For Republicans, 43.2 percent of the early voters are their registrants. This represents a GOP increase of 5.8 percentage points from their 2020 performance.

Nevada — Home of another key Senate race, the GOP has an early vote growth advantage in the Silver State. At this point, Target Smart records slightly more than 142,000 early votes, meaning just over 32 percent of the 2020 aggregate early number. The breakdown is 50.8 percent for Democrats and 42.7 percent for Republicans. This means Democrats are down about .3 percent from their 2020 participation rate, while Republicans are up just under two full percentage points. Nevada elections are always tight, so even small fluctuations like these can mean a great deal.

New Hampshire — Our final state in this report; though the early totals are small, about 21,000 voters, which represents only about 16.5 percent of the 2020 early aggregate, the trends are significant. A total of 54.0 percent of the new early voters are Democratic, down .7 percent from 2020, while the Republican total has grown 4.7 percentage points.

While none of these numbers are indicative of the final vote totals in any of the eight states, the early totals have given us previous clues as to which party has the momentum and enthusiasm in a particular place. We will continue to monitor these and other important states through the early voting process.