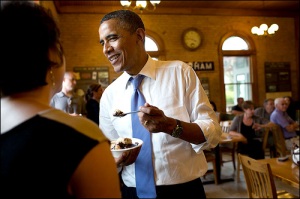 Polling in the presidential race is interesting because the national numbers have been projecting a very tight race, but not particularly so for the key states. Several surveys released yesterday now show a pattern similar to the tight nationwide margins in the core states of Florida, Ohio and Virginia, and second-tier swing state, Colorado.

Nationally, Gallup, Marist College for the McClatchy Newspapers, and the Purple Strategies organizations all give President Obama a two-point lead over presumptive Republican nominee Mitt Romney. But, Rasmussen Reports projects Mr. Romney to be holding the same two-point lead. All of the polls were conducted during the July 9-15 period, though the Rasmussen data is derived from daily tracking surveys.

While the president’s numbers in Florida, Ohio, Virginia and Colorado have exceeded his national performance, such is not the case in the latest wave of studies.

Ohio, where the president’s margins have typically been in the high single digits, now brandishes only a three-point Obama lead, 48-45 percent, again according to Purple Strategies.

Finally, in Virginia, where the Obama edge has been consistent and relatively strong, Purple Strategies forecasts that his Old Dominion lead is now down to just two points, 46-44 percent.