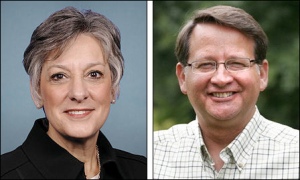 There has been some political speculation of late that Pennsylvania Rep. Allyson Schwartz (D-PA-13) and Michigan Rep. Gary Peters (D-MI-14) will forgo their 2014 re-election campaigns in order to challenge their respective Republican governors.

The new Democratic Congressional Campaign Committee (DCCC) assignments suggest that both of the aforementioned members of Congress will remain in their current positions, however. Schwartz has agreed to become the committee’s National Finance Chair and Peters will serve as the Candidate Recruitment Committee’s Vice-Chairman.

Their willingness to accept high-level House campaign-oriented positions sends the clear signal that both believe their future, at least for the short term, remains in the House and not in running for a state-based office.