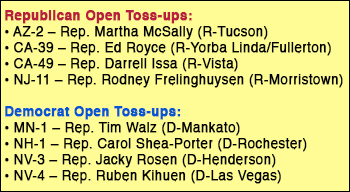 There is a strong likelihood that Pennsylvania will have a new congressional map this year, as the state Supreme Court has already ordered a re-draw. With four open seats available to collapse once the Republican legislature and Democrat governor reach a likely impasse, a court map could award the Dems potentially as much as a five-seat gain just within the Keystone State borders. New York features four Republican districts where GOP incumbents will draw heavy competition, and now New Jersey features two open seats that are vulnerable to Democrat conversion (retiring Rep. Frank LoBiondo’s 2nd District, and Frelinghuysen’s 11th CD), along with two more incumbents who can expect credible opposition.

Currently, Democrats feature former federal prosecutor Mikie Sherrill and businesswoman Tamara Harris as their two leading 11th District candidates. The former has more than $800,000 in the bank, the latter, almost $450,000. Their problem is much of this money will be spent against each other as the pair battle themselves and potentially two other contenders to become the Democratic nominee.

Without Congressman Frelinghuysen on the ballot, Republicans must start from ground zero. Thus, despite the strong Republican voting history here, and that the state redistricting commission drew this seat to be safe for the GOP, a toss-up rating for this seat is fair. Until we begin to see which Republicans may be coming forward and just how badly the Democrat winner might be damaged as two aggressive candidates tangle with each other for the opportunity to advance into the general election, it may be difficult to obtain an accurate reading until the filing deadline and primary elections yield tangible candidates.

The Frelinghuysen retirement brings the total House number of incumbents who will not stand for re-election to a robust 51, keeping in mind that we have passed candidate filing deadlines in only two states. Late retirements tend to pop in conjunction with the state’s candidate filing period, so we could see more coming in the ensuing weeks.

According to our House 2018 election grid, eight open seats, including NJ-11, are in the toss-up category but both parties risk four of those districts:

Now with 51 of 435 (11.7 percent) House seats incumbent-less for their the next election — either regular or special election cycle — it is expected that the open-seat number will grow even higher as the various state candidate filing deadlines begin to approach.