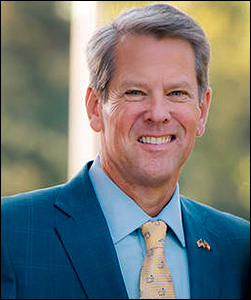 The crux of the Trump-Kemp controversy is that while the former president claims voter fraud allowed Joe Biden to score an 11,779 Georgia statewide victory, the governor, and Secretary of State Brad Raffensperger (R) point to repeated recounts that prove the vote totals are correct.

Trump argues that fraudulent votes are part of the count, citing video evidence of extra ballots stuffed in suitcases being pulled from under tables after poll workers were dismissed, among other examples. Kemp and Raffensperger dispel those claims. For his part, Secretary Raffensperger also faces a difficult Republican primary challenge against US Rep. Jody Hice (R-Greensboro) and others.

The eventual GOP gubernatorial nominee will then face a difficult draw with Abrams, who last week declared that she will return to run for governor again in 2022.

The Georgia governor’s race will now become a year-long campaign, as the newly formed Kemp-Perdue battle will culminate at the May 24 primary. Georgia, not surprisingly, has a nomination runoff law. The secondary nomination election, if necessary, is scheduled for July 26. It is highly probable, however, that a primary contest featuring two such well-known candidates would produce an outright winner.

With Georgia continuing in a state of political flux, and the electorate moving closer toward the Democrats with every election, we can count on seeing a period where Georgia joins Florida, North Carolina, and Nevada as perennially hosting razor-thin electoral results.