Rep. G.K. Butterfield’s (D-Wilson) retirement announcement throws the state’s new 2nd District into the slightly competitive range. President Biden would have carried this seat only with a 51-48% margin, thus meaning it could become competitive in a strong Republican year with a viable GOP candidate. Such could be the situation in 2022.

With the 2nd District potentially in play, even the state’s projected 10R-4D delegation split could possibly tilt even more toward the Republicans. That could be balanced, however, because the new 14th District in western North Carolina is more attainable for the Democrats. Rep. Madison Cawthorn (R-Hendersonville) deciding to run in District 13 means the more politically marginal 14th will move into the open seat category for 2022.

The Montana Districting and Apportionment Commission passed a congressional map that will likely send two Republicans to Washington, though the new western 1st District is potentially competitive. The map passed because one of the Democratic commissioners voted for the Republican plan.

Montana is the first state in history to be reduced to at-large status – this happened in the 1990 census – only to regain their lost seat. The state was awarded a second district in the current national reapportionment.

The main change in the nine-district map was to make freshman Rep. Victoria Spartz’s (R-Noblesville) seat more Republican by sending the previous 5th District’s Marion County precincts to other congressional districts. The Spartz seat was the most over-populated district in the state, having to release 50,921 individuals to other districts. Therefore, this district became the focal point of the new map.

The Indiana legislature drew a map that should return a 7R-2D delegation to Washington for most, if not all, of the current decade. 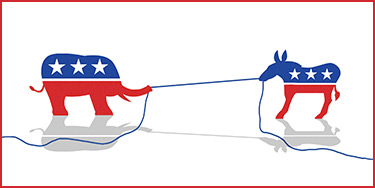