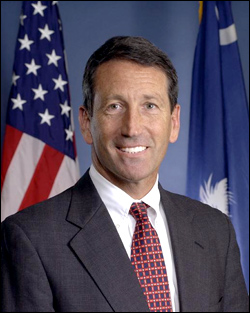 When scandal-ridden former South Carolina governor Mark Sanford (R) first announced he was attempting a political comeback by running in the current special congressional election cycle, many voters and political observers scoffed at his chances of victory. Last night, Sanford overcame the critics and quite possibly the odds as he won his Republican nomination with a rather impressive 57-43 percent victory over former Charleston County Councilman Curtis Bostic.

This sets up what promises to be a competitive special general election campaign with Democratic nominee Elizabeth Colbert Busch, the sister of Comedy Central comedian Stephen Colbert, even though South Carolina’s 1st Congressional District should be safely Republican.

As is typical for Palmetto State run-off elections, 85.6 percent of the number of primary voters returned to cast ballots for the secondary vote. The state, which features only two-week run-off cycles, performs better in turnout terms than others having a two-tiered nomination system. In most of those places, it is common to see participation levels drop by 50 percent or more. In yesterday’s GOP run-off, 46,071 individuals voted as compared to the 53,793 who cast ballots in the special primary election.

Though Bostic could not completely close the gap between he and the former governor, he did garner more than twice the number of new votes. In the first election, Bostic earned 7,168 votes. Sanford received 19,854. Last night, Bostic attracted support from almost 13,000 more individuals as compared to Sanford gaining 6,200+, but it obviously was not enough. Because of his noted financial disadvantage in comparison to Sanford’s campaign treasury, Bostic simply did not have the time to properly close the money gap or coalesce the potential anti-Sanford vote.

It is now obvious that the international extra-marital affair that cost him his marriage and tainted his time as governor is not a killer issue for Sanford among Republican voters. According to the previous Public Policy Polling survey released just before the run-off as we reported earlier, the ex-state chief executive’s favorability rating was projected at 55:40 percent positive to negative, almost exactly the percentage breakdown of last night’s run-off vote.

Now we turn our attention to the special general election scheduled for May 7. Can Colbert Busch take advantage of Sanford’s poor image within the electorate as a whole? Though he may be viewed more favorably by Republicans, among the overall electorate he registers only 34:58 percent according to the same poll.

As in all special elections, the turnout will tell the tale. While 53,000-plus Republicans participated in the primary, only 16,484 Democrats voted. Obviously, the Democratic number will have to improve if Busch has any hope of beating Sanford. Also, where do the disaffected Republicans, or those voting against Sanford, go? Do they vote Busch, reluctantly back Sanford, or simply stay home? It is this latter group that will likely write the final general election script.

The Public Policy Polling survey and one commissioned by the Busch campaign both projected the Democrat to have a slight two-point pre-run-off advantage over Sanford. Now, both parties will spend heavily to win this seat, much more than was originally forecast. Sanford’s nomination guarantees us a wildly competitive special general election, making it difficult to predict exactly how the race will ultimately unfold.