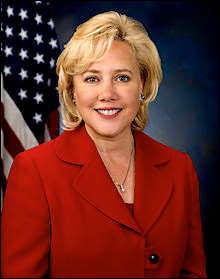 Public Policy Polling recently surveyed a Louisiana (Feb. 8-12; 603 registered Louisiana voters) sampling group for purposes of testing three-term Sen. Mary Landrieu’s (D) re-election viability. What they found is a senator who leads all of her potential Republican opponents, but only by close or relatively close margins. Ironically, it is the individual most likely to run, Rep. Bill Cassidy (R-LA-6), who appears to be in the weakest position.

On the job approval front, Sen. Landrieu scores a very mediocre 47:45 percent positive to negative, but this is a big improvement over PPP’s last poll (August 2010) when she was upside down to the tune of 41:53 percent.

Perhaps the bigger news is how far Gov. Bobby Jindal (R) has dropped in popularity. Though Jindal has already removed himself from consideration for the Senate race, PPP END_OF_DOCUMENT_TOKEN_TO_BE_REPLACED