Yesterday, a presidential candidate officially launched his campaign, but it’s not who you might expect. Barack Obama, the 44th president of the United States, on April 4 via a special announcement video in which he does not appear, has begun Campaign 2012.

The 2-minute, 10-second, short-take features people from the key states representing demographic and economic voter groups that must comprise a winning Obama coalition. Speaking for the president were Hispanic women in Nevada, a liberal white Colorado woman, an older white North Carolina male voter, a middle-aged female African-American Michigander, and a young New York male who was not eligible to cast a ballot for Mr. Obama in 2008. Re-uniting and energizing an even larger minority voting base (African-Americans, Hispanics, Asians), unmarried women, and white union voters is clearly the Obama 2012 campaign strategy. This is particularly so in places like Florida, North Carolina, Virginia and Nevada. A flip of just six states could mathematically reverse the 2008 election results.

Republicans were basically mum about the president’s re-election announcement, with one notable exception. Former New York City mayor Rudy Giuliani indicated that he is likely to run for president again if he perceives the GOP field of candidates to be weak.

Even though the 2010 election results aren’t yet finalized, speculation among political pundits about President Obama’s re-election chances already is running rampant.

Whether or not certain Republican candidates can win their party’s nomination and defeat Obama are topics for another day. The main purpose of this report is to simply analyze the mathematics that govern each side’s ability to win the next national election. 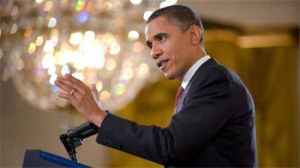 In 2008, President Obama secured his victory by winning 365 electoral votes (EVs); 270 are required. With reapportionment becoming official before December 31st, the 2012 map will begin to take shape. Right now, though, we know that Obama’s winning coalition of states will yield fewer electoral votes than it did in 2008.

Assuming that Texas gains four congressional seats from reapportionment, and Arizona, Georgia, South Carolina, and Utah all add one, a grand total of eight more electoral votes would be assigned to the group of states that supported ’08 Republican nominee John McCain. Obama states like Ohio (down two), New York, New Jersey, Pennsylvania, Massachusetts, Minnesota, Michigan, Illinois, and Iowa look to lose districts, thus meaning another 10 votes would be deducted from the President’s previous total. The only McCain state poised to lose a district is Louisiana. Florida, Nevada, and Washington are Obama states that look to gain representation, so add three EVs back to his total. Therefore, the new Obama state configuration would fall to an apparent total of 358 EVs.

The McCain coalition, on the other hand, would see a net gain of seven votes, giving this group of states a future total of 180 electoral votes. Assuming that pre-apportionment estimates are completely correct, which is unlikely (Oregon is in good position to gain and Missouri might lose, for example), the total swing away from the President when merely considering population shifts will be approximately 14 votes, or the size of a state like Michigan or Georgia.

If this analysis is correct, then the Republicans, in order to unseat Mr. Obama, would have to convert states with an electoral vote value of 90 votes, in addition to winning every previous state they claimed in 2008.

How can this be done? From a Republican perspective, they first must regain the states Obama won that traditionally vote for the GOP nominee. Indiana is priority #1, North Carolina is priority #2. Switching Indiana from blue to red would give the Republicans 11 more votes and take away the same number from the Obama total. An N.C. win is a swing of 30 EVs, thus bringing the EV count down to 332 to 206 and putting the GOP within 64 votes of denying the President a second term.

While that can be done by taking Pennsylvania or the president’s home state of Illinois, neither seems likely today, especially the latter. Therefore, the Republicans must add multiple states. Two small swing states that could return to the GOP fold are New Hampshire (4 EVs) and Nevada (6 EVs).

If all the above happens, then the Republican nominee would go over the top by winning just one of the following states: Michigan, Virginia, Wisconsin, or Colorado. Another option, if this latest group of states all remain loyal to Obama, is to carry Iowa and New Mexico (11 total EV’s). These two places are the only ones that have consistently flipped between the two presidential party nominees in the 21st century and must be considered competitive for both the eventual 2012 Democratic and Republican presidential nominees.

Though much will happen to define campaign 2012, the mathematical formula leading to victory will remain as described above.

For the most part, the 2010 election is in the books. With just a few races outstanding in the Senate, House, and Governors races, it appears the Republicans will command the next House of Representatives with anywhere from 239 to 242 seats, a stunning turnaround from the previous Congress. Such a composition of the body would mean a net gain of between 61 and 64 Republican seats. The new House will represent the largest GOP majority in the modern-day political era. The largest number of elected Republicans during the 12-year majority run (2005-2007) was 232.

The Senate races were kinder to Democrats. The Ds will hold the Senate with 52 or 53 seats depending upon the outcome in Washington. The winner of the Alaska seat is still in doubt, though the top two contenders, Sen. Lisa Murkowski (W/I) and Joe Miller (R) are both Republicans. Colorado was called earlier in the day for appointed Sen. Michael Bennet (D) by a very small margin over Weld County DA Ken Buck.

Several races remain outstanding for Governor: Connecticut, Illinois, Minnesota, Oregon, and Vermont. Republicans lead in Connecticut and Oregon; Democrats in the remaining three. If things stay as they are, the GOP will control 30 Governorships, the Democrats 19, with one Independent (former Republican-turned-Democrat-turned-Independent Sen. Lincoln Chafee). Earlier this morning, Florida and Maine were decided, both in favor of the Republican candidates.

The big story on the state front is the number of legislative chambers that flipped from Democrat to Republican. At this writing it appears that 20 chambers went from Democratic control to the GOP. Some of the surprises are both houses in the Alabama, Maine and Minnesota legislatures changing, the Texas House now breaks in favor of the GOP 101-43, and the party obtained the requisite number of new legislators to take full control in the critical redistricting states of Texas, Michigan, Ohio, and Pennsylvania. Florida remains under total Republican control, but a ballot initiative passed last night that will create a redistricting commission. A similar measure passed in California. Thus, the majority party in both of those states stand to fare worse through the commission process than if they were drawing the new maps themselves.

The interesting point about this landslide is that, in contrast with most others, the wave came from the bottom up. Only two incumbent Senators (Lincoln, Feingold) and a pair of incumbent Governors (Strickland, Culver) were defeated at the statewide level versus possibly more than 50 US House members and hundreds of state senators and representatives. This appears to be the biggest Republican legislative year since the Great Depression.

The bottom-up nature of this landslide makes it historically unique. In most such elections it is the statewide candidates who fare worse than those who represent districts. It is also the first time in history that the US House changed party control without the Senate following suit. In other years the Senate has flipped without the House, but never the inverse.

Much more in the coming days.

On Election morn, the Senate now appears to be the body with the most question marks. With the House trending toward a Republican majority, the Senate GOP races are now apparently closing in upon majority status, too. Throughout electoral history there has never been an election where the House flipped to a different party without the Senate. Thus, if the Republicans do gain control of the House and not the Senate, 2010 will make history because this will be the first time such a configuration has occurred.

The latest trends suggest that Nevada (Majority Leader Harry Reid), Illinois (Burris open), Pennsylvania (Specter open), and Colorado (appointed Sen. Michael Bennet), are all tilting the GOP’s way. Add those to the Democratic states of Arkansas, Indiana, North Dakota, and Wisconsin, all of which that secure in the Republican column, and that would mean the party is realistically approaching 49 seats. Thus, one of the following states would have to vote Republican to force a 50-50 tie: California, Connecticut, Washington, or West Virginia. Two wins in these four states would mean a companion Senate Republican majority.

In the final day, California looks to be tightening but incumbent Sen. Barbara Boxer still has a slight lead. In Connecticut, Democratic Attorney General Richard Blumenthal looks to have a lead beyond the margin of error. The race in Washington is approaching dead heat status; and in West Virginia, Gov. Joe Manchin has a slight lead, but is by no means secure. The Republicans need to throw a perfect political game tonight, and though attaining the majority in the Senate is still unlikely, one can at least see the goal from the current Republican perch.

As you know, tomorrow is Election Day and the 2010 cycle will soon be at a close, more than likely entering the history books as a defining vote to alter direction in public policy. While Democrats will likely hold onto the Senate by a vote or two, Republicans do appear positioned to regain control of the House of Representatives – but the size of the assumed new majority remains a question. The GOP also looks to hit or break the number 30 in gubernatorial offices held. The party may also control a record number of state legislative chambers when the sun rises on November 3rd.

In the Senate, the late trends favor Democrats in Connecticut (Richard Blumenthal) and West Virginia (Joe Manchin). Illinois remains too close to call between Rep. Mark Kirk (R-IL-10) and state Treasurer Alexi Giannoulias (D). Incumbent Democrats appear to be headed for close victories in California (Sen. Boxer) and Washington (Sen. Murray), but neither can be rated as secure just one day before the final voting.

New entries to the Republican conversion list based upon late breaking data include CO-3 (John Salazar), FL-2 (Allen Boyd), MI-7 (Mark Schauer), and SC-5 (John Spratt). Spratt, Paul Kanjorski (PA-11) and Chet Edwards (TX-17) appear to be the most senior members heading for apparent defeat. Most of the others are freshmen and sophomores.
Though the 22 seats in our Upset and Toss-up categories are not over, the GOP will likely win the preponderance of these campaigns. Thus, a GOP gain number in the low 50s is quite possible tomorrow night.

In the Governors races, the Republicans are poised to end the night with approximately 30 state houses in their column; a gain of six or more. Of the campaigns still rated as too close to call, only Florida has major national redistricting implications. If Democrat Alex Sink can score a victory in the Sunshine State, the map will likely be drawn by a federal three-judge panel, the normal course of action when the political parties divide a state’s executive and legislative branches of government. The other toss-ups, Massachusetts, Oregon, Rhode Island, and Vermont have little or no affect upon congressional redistricting. The big conversion prizes apparently headed the GOP’s way are Pennsylvania, Ohio, Michigan, Illinois, and Wisconsin. All are key in the next redistricting fight.