Former Florida Gov. Charlie Crist officially registered as a Democrat yesterday in what is likely a prelude to entering the 2014 gubernatorial contest against incumbent Rick Scott (R). Crist announced the move via his Twitter account, Tweeting a picture Friday of he and his beaming wife with his Florida voter registration form. Crist, as a Republican, served one term as governor and chose to run for Senate instead of seeking re-election. The move proved politically disastrous.

Marco Rubio, then a former state House Speaker, ran such an effective early Republican primary campaign that Crist was literally forced out of the party, choosing to run in the general election as an Independent. He placed second to Rubio, trailing 49-30 percent, but came in 10 points ahead of the Democratic nominee, then-Rep. Kendrick Meek (D-FL-17).

Usually, a party-switcher’s most difficult election is his first primary in the new party. If Crist enters the Democratic nomination contest, he almost assuredly will have competition. In fact, he could still face the Democratic 2010 gubernatorial nominee, former Florida Chief Financial Officer Alex Sink, who only lost to Scott by a scant one percentage point, 49-48 percent. Sink has yet to rule out another run.

Scott is viewed as vulnerable because his job approval ratings have continued to hover around the 40 percent mark or lower for most of his tenure. As is the case for virtually every race in Florida, the contest is expected to be close. 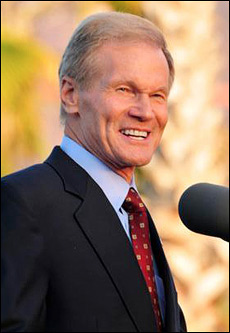 Things are heating up in the Florida Senate challenge to incumbent Senator Bill Nelson (D). Former interim Sen. George LeMieux dropped out of the Republican race earlier in the week and, in a statement released early Wednesday, indicated that he believed the national Republican Party had thrown its support behind Rep. Connie Mack IV (R-FL-14).

Former governor Charlie Crist (R-I) appointed LeMieux to the Senate in 2009 to fulfill the unexpired term of Sen. Mel Martinez (R) after his abrupt resignation. Crist went on to run for the seat in 2010 without party affiliation and lost to freshman Sen. Marco Rubio (R).

The developments again reveal the power political establishment backing has over candidates, even those with relatively high familiarity with voters. The other late breaking development here, and the two are related, is the emergence of former Rep. Dave Weldon (R-FL-15), who just recently and surprisingly indicated that he is entering the Senate race. While Mack is still heavily favored over Weldon, the campaign is just now reaching the cusp of the stretch drive for the Aug. 14 primary when many things change. Aside from Weldon, retired Army Col. Mike McCalister is also in the Republican race.

In a poll released yesterday, Quinnipac University found that Sen. Nelson has a slight 43-39 percent edge over Rep. Mack, but the young Republican congressman appears to be the prohibitive favorite for his party nomination. The poll, conducted June 12-18, prior to LeMieux’s departure, surveyed 1,697 registered voters with a margin of error of +/- 2.4 percentage points. Mack polled the strongest among the GOP contenders, with the others trailing Nelson in double digits: 47-32 percent (LeMieux); 45-34 percent (McCalister); and 47-31 percent (Weldon).

Nelson’s slight lead over Mack is a net five point increase for the senator compared to the virtual tie Quinnipiac found in their May 24 poll (Mack leading 42-41 percent).

In the Republican primary, the Q-Poll shows Mack posting 41 percent, LeMieux in second with 8 percent, and McCalister following with 5 percent, while the late arriving Weldon registered only 3 percent among the 698 self-identified Republicans tested.

Though Mack and Nelson are running close in both private and public polling, it is Nelson’s major financial war chest that has most GOP operatives concerned. The senator has compiled an almost $8 million financial edge over his competitors and even with so many hot races taking place in Florida this cycle, he will still have the wherewithal to position himself strongly in the most expensive of television markets. Now with LeMieux out of the primary and Mack now clearly the GOP favorite, some Republican resources that otherwise would have gone towards winning the mid-August election can now be saved for the general.

The senator, who won his 2006 re-election with 60.3 percent of the vote, faces new economic challenges in the Sunshine state and, while he remains as the favorite in the race, the contest will definitely come down to the wire. This is a bona-fide contest with national implications.